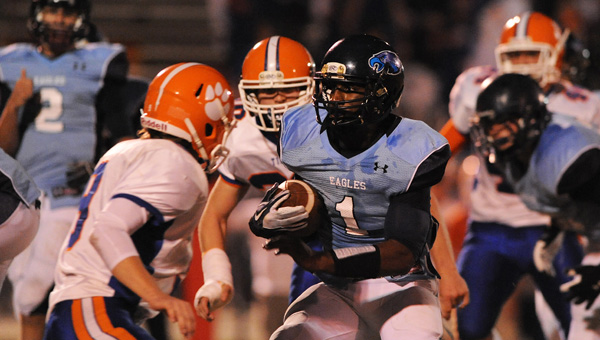 Calera's Ronnie Clark looks to slice through the Chilton County defense during the game Nov. 2 in Calera. (Reporter Photo/Jon Goering)

CALERA – The Chilton County Tigers rallied back to score 29 unanswered points to defeat the Calera Eagles 29-23 on the road on Nov. 2.

Calera (8-2, 6-1 in Class 4A, Region 4) scored quickly and often in the first quarter to take a 23-0 lead headed into the second period. Eagles’ quarterback Zack Reneau and Ronnie Clark each scored touchdowns on the ground to give Calera a 14-0 lead.

On the kickoff following the Clark score, Calera tackled the Tigers’ returner as he scrambled into the end zone for a safety to extend the Eagles’ lead to 16-0.

Calera capitalized on their possession following the safety when Reneau found Jordan Bishop for a 26-yard touchdown pass for a 23-0 Calera lead after one period of play.

“I thought we came out with a lot of enthusiasm and excitement when we jumped on them early,” said Eagles’ head coach Wade McKeller. “(Chilton County) didn’t give up fighting to the end.”

The Tigers only ran three offensive plays in the opening period, but turned things around on their first possession of the second quarter. Chilton County appeared to be held to a three-and-out, but the Tigers recovered a muffed punt by Calera to regain possession at the Eagles’ 20-yard line.

It took five plays for Chilton County to find the end zone when Richard Hilliard ran in from 3-yards out to put the Tigers on the board, 23-7.

The Tigers began to swing the momentum in their favor in the second half with a scoring drive on their first possession of the third quarter. Chance Britnell connected with Vadall Morrow on a 30-yard touchdown to close the score even more, 23-14 with eight mintues left in the period.

Chilton County picked up their third straight score late in the third quarter when Michael Seaton capped an 80-yard drive with a 6-yard touchdown run to pull the Tigers within two, 23-21 headed into the fourth quarter.

The Tigers’ defense stood tall on the following Calera possession forcing the Eagles to punt on a three-and-out. Chilton County again took advantage with a 55-yard drive capped by a Seaton score to take a 27-23 lead. Chilton County added the two-point conversion when Morrow ran into the end zone to give the Tigers a six-point edge, 29-23 with 9:35 remaining.

The Eagles appeared as if they were going to tie the game on their following drive. Clark led Calera rushing on all seven plays, but the Tigers forced a fumble at their 2-yard line to end the Eagles’ threat.

Calera had four offensive series in the second half, two ended on turnovers.

“We have done a good job at not turning the ball over,” said McKeller on the miscues. “Tonight we played sloppy. If anything else, it’s a wake up call.”

Chilton County’s Seaton finished the game rushing for 115 yards on 20 carries and two touchdowns. Morrow led the Tigers’ receivers with three catches for 46 yards and a touchdown.

Calera will prepare for the Class 4A playoffs on Nov. 9 when they host Handley.

Oak Mountain's Harold Shader turns the corner in the Eagles' 36-25 loss to Clay-Chalkville on Nov. 2. (Contribued/Barry Clemons) By... read more