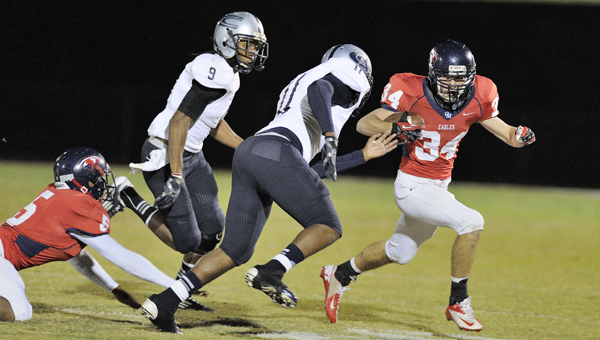 NORTH SHELBY – The Oak Mountain Eagles’ senior night came to a disappointing conclusion Friday night as they lost 36-25 to Clay-Chalkville.

Oak Mountain will advance to a date with Auburn in the AHSAA Class 6A playoffs with a 7-3 regular season record. It will be the Eagles’ first playoff berth since 2005.

The first quarter was a defensive struggle, the only score being a 23-yard Oak Mountain field goal from senior John Michael Miller.

After Eagle senior Bowen Gurkin intercepted a Clay-Chalkville pass to end the quarter, the Cougars responded on defense.

A 76-yard fumble recovery by Brandon Fuller was the game’s first touchdown.  Clay-Chalkville took a 7-3 lead 18 seconds into the second quarter.

Josh Gaines scored from 62 yards out on the Eagles’ next drive.  After a failed two-point conversion Oak Mountain led 9-7.

The Cougars continued the streak of long touchdowns on their ensuing possession when Terrelle West took a handoff 54 yards to the end zone to put Clay up 14-9.

Oak Mountain responded with another touchdown when senior quarterback Jake Adams rushed for an 11-yard score. The score was 15-14 in favor of Oak Mountain following another failed two-point try.

After an Eagle fumble, the Cougars pulled ahead with 44 seconds until halftime.  Quarterback Hayden Moore scored on a four-yard run to make Clay-Chalkville’s halftime lead 22-15.

The Eagles scored next on their second drive of the third quarter.  A 41-yard Miller field goal made the score 22-18 with 1:40 to play in the quarter.

Clay-Chalkville scored on their next two possessions to practically put the game out of reach for Oak Mountain.

Trailing 36-18, the Eagles attempted a comeback. After trading punts with the Cougars Oak Mountain scored the last points of the game.  Adams threw a six-yard touchdown pass to fellow senior Scott Hester to bring the score to its final 36-25 mark.

Despite losing Gaines to a second-quarter ankle injury, Oak Mountain first-year head coach Cris Bell decided to compete to the end instead of rest his key players.

“I liked the way we finished there at the end,” Bell said. “If we’ve got a ball game we always play it to win, and I’m not going to cheat our guys (by making them sit out).”

For Oak Mountain’s seniors, Friday night capped a dynamic turnaround from their past three years in Eagles uniforms.

“We’ve done a remarkable job of coming out and buying into what Coach Bell is selling,” Miller said.

The Eagles will head to Auburn next week for a Class 6A playoff match-up against the second-place team from Region 3.

“It’s been a great year playing with these guys,” Hester said. “Hopefully we’ll get to make a run in the playoffs.”

Thompson senior wide receiver Hayden Franklin looks to get by a John Carroll defender in the Warriors' 42-28 victory on... read more