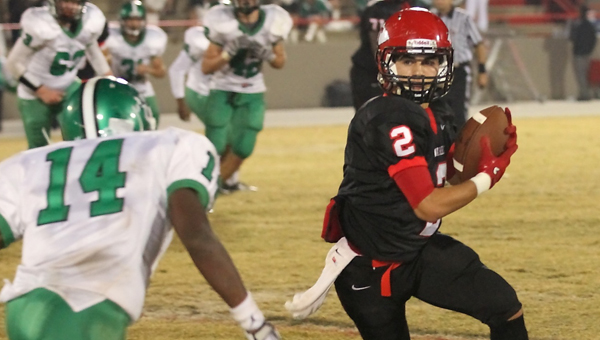 Thompson senior wide receiver Hayden Franklin looks to get by a John Carroll defender in the Warriors' 42-28 victory on Nov. 2. (For the Reporter/Eric Starling)

By ERIC STARLING / FOR THE REPORTER

ALABASTER– The Thompson Warriors hosted John Carroll in their final contest of the season, and they went out on top with a 42-28 victory.

Thompson’s first score came on a two-yard run by Dee Tolbert. The Warriors had driven 68 yards for the score. A David Buckelew extra point made it 7-0.

Early in the second quarter, the Cavaliers fumbled the ball, and Thompson’s John Thompson scooped it up for the Warriors. Tolbert carried the ball on three straight plays and scored from 5-yards out for his second rushing touchdown of the night.

On the very next defensive series for the Warriors, Austin Bates recovered a John Carroll fumble and scrambled down to the Cavaliers 28-yard line. Tolbert eventually took a Trey Matherson handoff at the 5-yard line and pushed his way into the end zone for the trifecta. Buckelew’s extra point made it 21-0.

The Cavaliers would put together an eleven play drive and get on the board. A 2-point conversion would make it 21-8, Thompson.

After a John Carroll onside kick attempt, Matherson ran the hurry-up offense and put the ball in the air, moving the Warriors from their own 38 to the Cavalier’s 5-yard line. He hit a leaping Eric Reeves in the corner of the end zone for the final score of the first half and a 28-8 lead.

“We started the year with 36 seniors, and tonight we finished with 25 still on the roster,” commented Coach Michael Montgomery.  “The character of a player has nothing to do with how many times they get knocked down, but how many times they’re willing to get back up.  Tonight our guys fought hard, went out with a win, and gave these underclassmen something to build upon for the future.”

Tolbert added his fourth touchdown of the night in the third quarter. He finished with 21 carries for 189 yards and four touchdowns.

With five minutes remaining in the contest, the Warriors drove 79 yards to put the exclamation on their statement for the evening. Matherson again connected with Reeves for the touchdown and Buckelew would finish a perfect 6-6 for extra points made.

Matherson was 15-of-25 for 222 yards and two scores. Those two touchdown passes went to Reeves who finished the night with 11 catches for 173 yards.