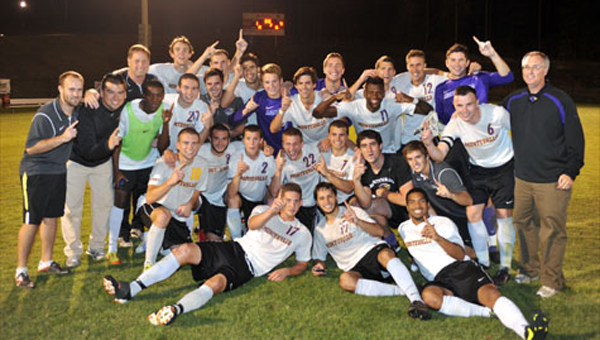 The Falcons, who entered the tournament as the No. 2 seed, defeated No. 7 seed Clayton State University and No. 3 seed Flagler College before taking down No. 8 seed USC Aiken in the championship match.

Freshman Pierre Omanga, who was named the tournament’s Most Valuable Player, led Montevallo (13-4-2) with two goals in the conference tournament title match.

“I’m so proud to be part of this team,” Omanga said. “I’ve got great teammates and a great coach.”

O’Neill scored the first goal in the match in the sixth minute off an assist by senior Shane Howard to give Montevallo a 1-0 lead. O’Neill headed in a free kick off the foot of Howard to give the Falcons an early advantage.

“As soon as we scored the first goal we relaxed a little bit,” Hassler said.

The Pacers took advantage of a free kick misplayed by Montevallo in the 39th minute to tie the match at 1-1. Ledgeway came out near midfield to take a free kick and played it short, which was intercepted seconds later by Noel Mais. Mais fired a shot off the left post from 25 yards out after the Montevallo goalkeeper, who wasn’t able to get back in position to defend the attack.

Following a 45-minute delay at halftime due to lightning in the area, the Falcons dominated the second half.

Omanga netted a penalty kick in the 56th minute following a foul in front of the USC Aiken goal to put the Falcons ahead 2-1.

“We were fortunate to have the extra time at the break,” Hassler said. “It allowed us to make a few extra adjustments in the second half.”

Just more than seven minutes later, Howard flicked in a shot attempt over the top of USC Aiken goalkeeper Brandon Jarosz to give the Falcons a two-goal lead. Omanga capped the scoring in the match with another penalty kick following another foul in front of the Pacers’ net in the 67th minute, which gave Montevallo a 4-1 advantage.

The Falcons limited the Pacers’ scoring chances down the stretch to clinch the three-goal victory. Ledgeway, fresh off being named the conference’s Player of the Year, finished with two saves in the match.

Montevallo will await the release of the final NCAA Division II Southeast Region rankings Nov. 5 at 6 p.m., which will determine the teams that advance to the NCAA Division II men’s soccer tournament.

The Falcons are searching for their seventh NCAA Division II tournament appearance in program history, including their third consecutive postseason appearance.