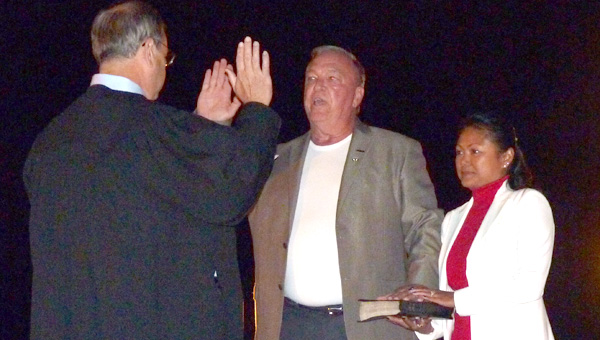 COLUMBIANA — A chilly first Monday in November was anything but in Columbiana as several hundred citizens turned out to witness the inauguration of a new mayor and council members.

Main Street was hot and hopping, lined with tents and tables from a variety of city businesses, each serving a plethora of free food and drink offerings. Residents brought out lawn chairs and mingled while enjoying the music of Artie Childs.

Columbiana Cub and Boy Scouts presented the U.S. and Alabama flags and led the crowd in the Pledge of Allegiance before Municipal Judge Mike Atchison swore in the city’s elected officials.

“I’m going to keep it short and sweet. I’m going to let this administration’s actions do the talking,” Handley told the crowd.

Others taking the oath of office Monday evening were:

The Montevallo Development Cooperative District is seeking proposals from interested parties to develop a restaurant in the Alabama Coach Station... read more