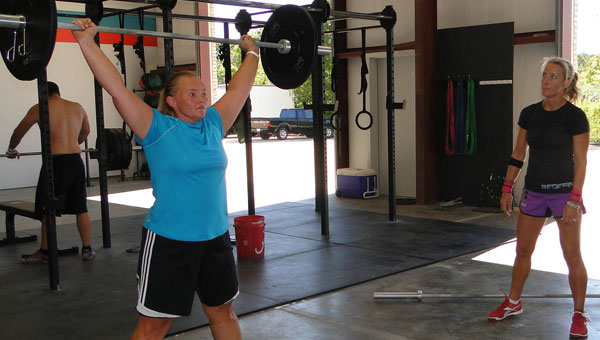 When CrossFit Alabaster head coach Dawn South heard of my flying adventure, she invited me to join a class. South, Leigh Hulsey and James Washer own CrossFit Alabaster, located off Shelby County on Wellington Manor Court. Joe Messina works with them as a coach.

Flying a plane was effortless compared to CrossFit. Despite my body screaming how long it had been since doing push-ups, sit-ups and pull-ups, I pushed through because South and gym members encouraged me, as well as sheer determination. I was initially tired and shaky, but “no pain, no gain.”

Alabaster CrossFit is more than a fitness program. It is a community, a place to make friends while reaching your fitness goal. Members compete with themselves, and while some finish their workout more quickly, the last person finishing is just as important as the first.

The atmosphere is ecstatic as members encourage and cheer each other on.

CrossFit is a lifestyle of prioritizing health and fitness. It’s physically and emotionally rewarding.

South said general consensus is people start getting out of the shape at the age of 40, but she disagrees.

“My mom is in her 60s and is in good shape because she is active and her work involves delivering packages. I know women the same age as my mom who have health issues because they are do nothing to stay fit,” South said.

Members start the program with a foundations course.

The instructor reviews exercises such as push-ups, squats, lunges, and teaches foundational movements such as dead lifts and push jerks.

After completion of the course, members join regular one-hour classes.

Alabaster resident Becky Glasscock began CrossFit seven months ago. “When my family challenged me to do CrossFit, I knew it would be difficult.

“I lost 40 pounds before I started, and now it’s close to 100 due to exercising and eating a Paleo diet.”