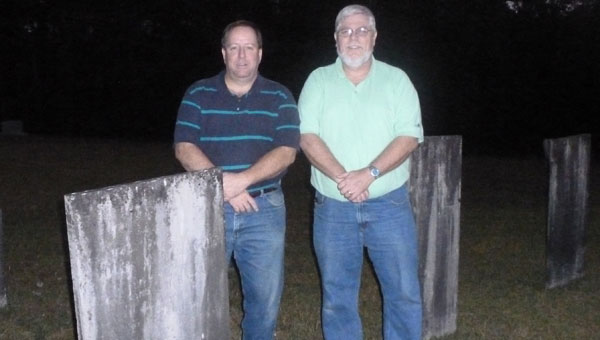 Harold Roper, minister of music, and Brother Roger Chambers, pastor of Fourmile Baptist Church, stand among some of the oldest graves at the church’s cemetery. (Contributed)

Fourmile Baptist Church has a long, rich history. Founded in 1824, a cemetery next to the church holds the resting places of early settlers of Shelby County to present day. One of the earliest graves is Henry W. Robertson 1782-1853.

More than 60 veterans from the Civil War, World War I, World War II, Korean and Vietnam wars were found in this small cemetery. To honor the veterans and others, a love offering raised funds for a flag pole to be placed in the center of the cemetery and a dedication ceremony honoring veterans was held last year.

The service was so moving, the church has decided to make it an annual event. On Sunday, Nov. 11, at 3 p.m. the second annual Veterans Day Celebration will be held at Fourmile Baptist Church in the cemetery holding so many veterans who are buried there.

The prisoners at the Alabama Therapeutic Education Facility (ATEF), who are part of the J. F. Ingram carpentry shop, are making wooden crosses painted white with a hole in the top for an American Flag. Brown Lumber donated the wood for the crosses. The crosses will be lined up at the cemetery.

The service will begin with prayer by Chambers. Music will be provided by Chelsea’s Mary Padgett, who was a contestant on “The Voice.” Also, a bagpiper and the church’s ensemble, comprised of SCHS band students and alumni, will perform. All veterans present will be recognized. Family members will then place a cross on their veteran’s grave. If no family member is present, the children of the church will place the cross. At the end of the service, “Taps” will be played with a reception following in the church parlor organized by Mrs. Frieda Perry.

The list of veterans in the grave is not complete. If anyone has any knowledge of veterans buried at Fourmile, please email Chambers at fourmilepastor@yahoo.com.