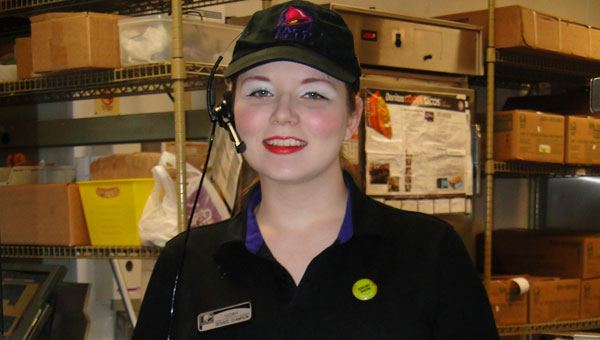 The world would be a better place with more fast food cashiers like Ivory Fields. (Contributed)

My first encounter with Ivory was an evening in June. The drive-through line at Calera Taco Bell was long, so I went inside. That line was equally long, but I stood in line because my daughter traveling home from Texas was expecting taco salad.

Looking around at the seated customers, I watched a child struggle with her mother to hold her own cup — just like me at that age, I thought. My heart went out to the mother when she lost the battle and the floor turned red.

When I was next in line to order, my attention was given over to the cashier as she conversed with a customer. I was feeling a little irritable, but her voice changed my demeanor.

I stepped to the register and a girl with milky white skin and perfectly applied make-up asked for my order. I looked at her nametag as I gave my order. “Will that be all for you tonight, hon?” Ivory Fields asked in a lovely southern accent.

As Ivory handed me a receipt, her entrancing voice thanked me. I stepped away, but continued to listen to her converse with customers. Ivory’s southern charm was captivating.

Ivory called my number and handed me a sack and a cup. I didn’t order a drink, and though I assumed it was a courtesy for the wait, I asked why she gave it to me. “Cause you’re just so pretty,” Ivory drawled.

I thought of Ivory afterwards when I passed Taco Bell, but forgot about her in time. Several months later I’m ordering at Taco Bell’s drive-thru and recognized a familiar voice coming through the speaker. When I pulled to the window, Ivory smiled and greeted me as she took my money. She handed me my order and her southern charm captured me once again as she said, “You enjoy that, hon.”

Mother Theresa said, “Kind words can be short and easy to speak, but their echoes are truly endless.” The echoes of Ivory’s words have surely left an everlasting impression on me.

Ivory Fields is a Montevallo resident and has been employed with Calera Taco Bell for seven months.