Spreading good cheer with a broom and a mop 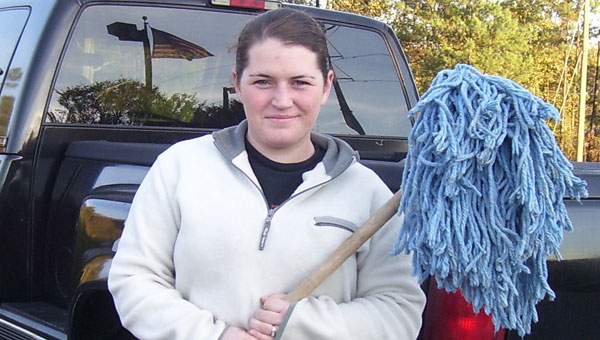 Jen Chance is one of the many young entrepreneurs around the country who recently began a small, profitable business of her own.

She likes pleasing people and making them happy, she said. That’s one of the reasons she took on her new work.

For two years, she worked at Huddle House, which she also enjoyed, Jen said. But she wanted a business of her own, and work where she could spend more time with her family. She and her husband have a little boy, 4, and a little girl, 5, she said.

Already cleaning house for one family and enjoying that, she decided to start a house cleaning business.

With the help of an online business card app, she printed up some cards and put them out where they would catch a person’s eye. Right away she began getting calls from people wanting her to clean for them. But many of her customers came by word-of-mouth, she said. And a lot of them are people she met at Huddle House.

By May of this year, the business had really “taken off.” So, she left her serving job at the restaurant and struck out on her own. For a while, a friend helped her, and they named the business Two Women and a Mop. Then her friend could no longer help, so she’s working by herself now. But she’s getting so many calls lately that she’s thinking of hiring new help, she said.

She already has 15 regular houses, plus occasional reconstructed and newly built ones. Most of them are in the Chelsea area, but she also has some in Inverness and Columbiana, she said.

According to Jen’s cute business cards floating around town, she is cleaning up the world one house at a time. She is also open to commercial cleaning, and will give free estimates.

Jan Higdon and husband, the Rev. Alan Higdon, enjoy a wedding reception for a former member of their youth group... read more