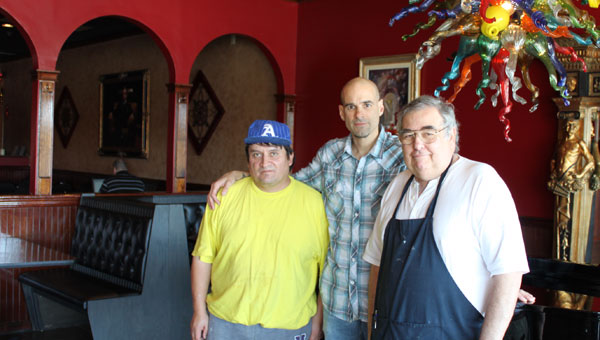 NORTH SHELBY – An authentic Italian restaurant with recipes passed through the generations has opened in North Shelby.

Tony’s Spaghetti House, which is located at 5287 U.S. 280 in the same shopping center as Books-A-Million and Lowe’s, was opened by “Big” Tony Falletta and his son, “Little” Tony Falletta Jr., Oct. 29.

The family previously owned Leonardo’s, an Italian restaurant in Vestavia, for 13 years before closing its doors and deciding to move to U.S. 280.

The new restaurant adopted the same name as the family’s original restaurant. Tony Falletta, who manages the dining room while his son mans the kitchen, said the restaurant serves the same basic food as Leonardo’s.

When asked if the rolls are freshly made everyday, Falletta chuckled and said, “We make them every hour.”

The Fallettas opened their first restaurant in Irondale in 1976, with “Big” Tony Falletta’s parents at the helm.

Tony’s Spaghetti House is open for lunch and dinner every day except Sundays, when only lunch is served. A grand piano sits in the dining room for live music entertainment during the weekends.

Black-and-white photos hang on the walls feature Falletta family members from an era gone by.

“We’ve always had a really good family atmosphere,” Falletta said. “We like to get to know the customers. So many customers from Vestavia have come down here to see us.”

Falletta said his family tries to be involved in everything from weddings to funerals to first communions.

“We try to be a part of the community and get to know the customers,” he said.

The menu features pizzas made in a stone pizza oven, calzones and traditional Italian dishes, such as lasagna, rigatoni, ravioli and eggplant parmesan.

“All of our recipes are authentic Sicilian recipes handed down to family,” Falletta said.

The dessert menu has traditional desserts like tiramisu and cannolis.

“My wife makes a chocolate-chocolate cake with Ghirardelli chocolate chunks. It’s so chocolatey that if you don’t have ice cream, your mouth will be glued together,” Falletta said with a grin.

Santa and Mrs. Claus wave during the finale of the 2011 Montevallo Christmas Parade. (File) By CHRISTINE BOATWRIGHT / Staff... read more