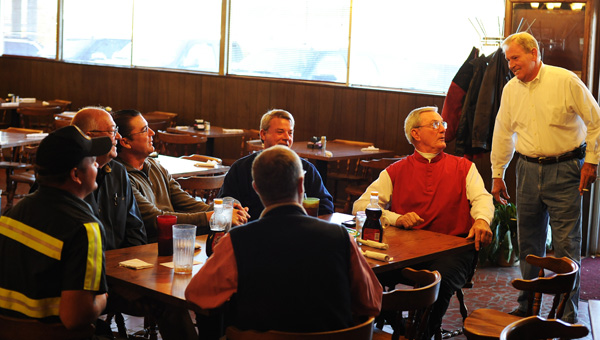 PELHAM – Over mugs of steaming coffee, a group of local men discussed the presidential election results at Fran’s Restaurant in Pelham.

Neil Bailey, owner of Neil Bailey Insurance and Investments in Pelham, sat at the head of the table and became the first spokesperson for the group of seven.

“We’re just proud to be Americans. Obviously, as Republicans, we didn’t get our wishes,” Bailey said of President Barack Obama’s reelection. “Republicans just didn’t present a proper platform and missed the vote.”

Bailey then commented on the legalization of recreational marijuana in Colorado and Washington, as well as the approval of same-sex marriage in Maine and Maryland.

In relation to Alabama amendments presented on the ballot, Bailey said he was “pretty satisfied” with the outcome.

Woody Quinn said he wished the restaurant’s late owner, Fran Driver, who passed away in February, was available to give her comments.

“If Mrs. Fran was still here, she’d give you an unbiased opinion, that’s for sure,” Quinn said, smiling.

As a local business owner, Quinn, owner of C&W Drilling Inc. in Columbiana, said his “biggest disappointment” in the election involves business regulations.

“The government has overregulated businesses like mine and Neil (Bailey’s). I was hoping a Republican would make an impact on that. It’s so expensive to operate and the liability is so great.”

“Sooner or later, it could be next week, next year or four years from now, the competition for money is going to drive interest rates up,” Phillips said.

“Bottom line, we wake up today and keep doing what we’re doing. We keep pedaling,” he added.

“I voted no-Bama,” Rollan announced to the table as he sat down.

“We’ve got to keep our country solvent and preserve our country for future generations,” he said. “When it’s all said and done, I’m still glad to be here.”

How each municipality voted in the presidential race

By NEAL WAGNER / City Editor Tens of thousands of Shelby County voters took to the polls on Nov. 6... read more