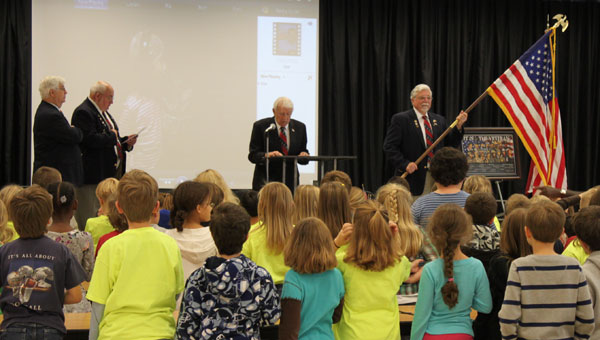 Trustee Ron Kenny told the students their physical characteristics, such as hair color and height, runs in their “bloodstream.”

“There’s one thing you did not get in your bloodstream, and that’s freedom,” Kenny said. “With freedom, you need to love it, grab it, protect it and even improve upon it.”

Kenny explained how Veterans Day was originally Armistice Day, with the signing of the armistice after World War I on the 11th hour, 11th day of the 11th month. The holiday changed to Veterans Day to include veterans from other wars.

Tom Davidson, an Elks Lodge member, taught the students to salute the flag by tucking their thumbs behind their hands.

After the program, the students each received dictionaries, pencils and bookmarks.

“We share with children because it’s important to have a sense of history,” Secretary Leon Johnston said. “It’s vital to keep the American tradition in front of our young people.”

Johnston said when the Elks Lodge members visited another Shelby County school, one student said the dictionary was the first book the child had ever owned.

“That’s why we’re here and do what we do,” Johnston said.

In addition to providing dictionaries to third graders, the Cahaba Valley Elks Lodge also provides comfort items for local dialysis patients and their caregivers, as well as scholarships for high school seniors.

“With young people, we try to help make them good citizens, and with older people and veterans, we thank them for being good citizens,” Johnston said.

A Helena committee is planning to hold a vote on Nov. 27 to allow local students and residents to vote... read more