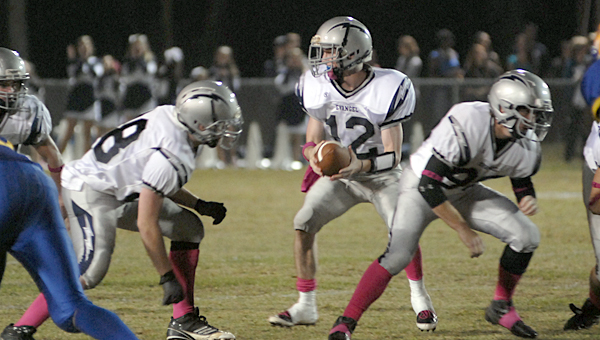 Evangel Christian's Andrew Thompson led the Lightning with 122 yards passing and a touchdown in their 51-14 loss at the NACA tournament in Dayton, Tenn. on Nov. 7. (File)

DAYTON, Tenn. – The Evangel Christian Lightning was unable to recover from a large, early deficit to fall to the Christian Community School (Tenn.) Colts to fall 51-14 in the first round of the National Association of Christian Athletes (NACA) Eight-man Division 1 tournament on Nov. 7.

The Lightning will take on Macon Road Christian of Memphis, Tenn. in the third place game on Nov. 9.

Christian Community took a 20-0 lead in the first quarter and extended their lead in the second period. The Colts added four touchowns before the half for a 45-0 lead.

The Colts took a 51-0 lead in the third quarter, but Andrew Thompson led Evangel on a scoring drive to break up the shutout. Thompson connected with Josh Letson for a 65-yard touchdown pass to put the Lightning on the board, 51-6.

Evangel’s Brandon Montgomery had the only touchdown of the fourth period for the second Lightning score of the game. Montgomery punched the ball in from 2-yards out and Pete Sullivan added the two-point conversion for the 51-14 final score.

FROM STAFF REPORTS Alabama Hockey heads to Pelham this weekend for its first home games of the season. The Frozen... read more