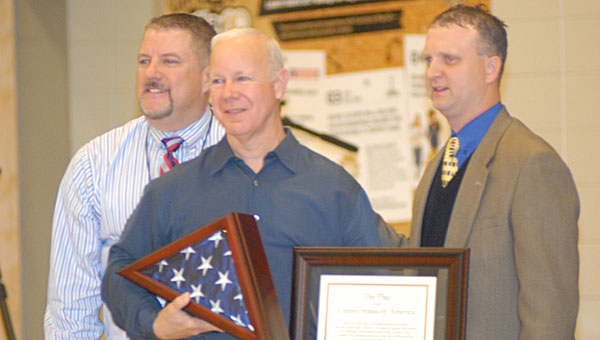 When Helena Middle School teacher Glenn Floyd heard his name called during a Nov. 7 Veterans Day ceremony in the school’s gym, he wasn’t sure what to expect.

At the end of the program, Floyd’s friend and fellow HMS teacher Mark Sanders called Floyd to the podium to honor his lengthy career in education and with the U.S. Army. Floyd recently retired from the Army Reserve, and is planning to retire from teaching in May 2013.

Floyd entered the armed forces in 1971, serving in active duty, with the Army National Guard and with the Army Reserve over the past several decades, working his way up to the rank of Lieutenant Colonel before retiring a few months ago.

While serving in the military, Floyd also taught in several schools in Shelby County, such as Shelby Academy, Montevallo Middle, Riverchase Middle and Helena Middle.

“Today, we would like to honor one of our own,” Sanders said before calling Floyd to the front of the gym. “Your selflessness is both humbling and inspiring.”

Sanders and HMS Principal Scott Knight presented Floyd with a state proclamation in his honor, an American flag flown over the U.S. Capitol building on July 4, 2012 and an autographed picture from University of Alabama football coach Nick Saban. Floyd’s family members were also invited to attend the surprise ceremony.

“I don’t feel like I deserve this,” Floyd said. “It’s wonderful to know that you’ve got friends who care this much about you.”

Floyd’s presentation came after a Veterans Day ceremony including performances from the HMS band and choir and speeches from several HMS students. During the ceremony, the HMS students and faculty members honored the dozens of active and retired military personnel in attendance, and held a reception for them after the program.

By CHRISTINE BOATWRIGHT / Staff Writer BIRMINGHAM – A man in downtown Birmingham cut a Montevallo woman’s face with a... read more