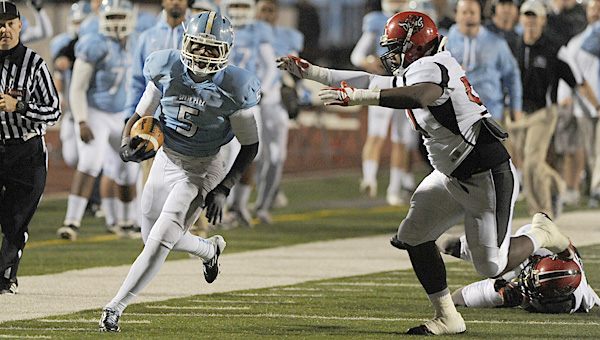 NORTH SHELBY – The Spain Park Jaguars scored all seven of their touchdowns on the ground to rout the Central-Phenix City Red Devils 43-13 in the first round of the Class 6A playoffs on Nov. 9.

The Jaguars will host Foley on Nov. 16 in the second round.

“Things went our way and I’m really proud of our guys,” said Spain Park head coach Chip Lindsey. “I thought we played well on both sides of the ball.”

Spain Park totaled 467 yards of offense in the game including 327 yards passing by senior quarterback Nick Mullens. Mullens completed 68 percent of his passes (19-of-28).

Otis Harris rushed for only 48 yards on 11 carries but had four of the seven Jaguar touchdowns.

While the offense was off and running, the Spain Park defense held Central to 315 of total offense, including 91 yards in the second half.

Spain Park got on the board first scoring 10 unanswered points. Jontez Turner capped a five-play drive with a three-yard touchdown run and Thomas Taylor added a 33-yard field goal for a 10-0 Spain Park lead late in the first quarter.

Traveon Samuel led Central on a five-play, 60-yard scoring drive. Samuel accounted for 50 yards including the 20-yard touchdown run to close the score, 10-7 at the end of the first quarter.

The Jaguars answered right back with a quick score. Mullens connected with Harris for a 48-yard gain to set up a two-yard Harris run for a touchdown to extend the Jags’ lead to 17-7

Harris added his second touchdown on the next Spain Park drive on a seven-yard run to put the Jaguars ahead, 23-7.

Samuel cut the Spain Park lead to 10 on the Red Devils’ ensuing possession. The sophomore running back capped the six-play drive with a 13-yard touchdown run for a 23-13 score.

Carter extend the Spain Park lead to 30-13 at the half with a three-yard touchdown run for his second touchdown of the game.

The Jaguars outscored Central 13-0 in the second half to seal up the 43-13 victory. Harris scored his fourth touchdown on a two-yard score and Wade Streeter added a seven-yard touchdown in the third quarter.

Streeter led the Jaguars with 49 yards rushing with a touchdown and Turner finished the game with 47 yards and two scores.

Harris led the receivers with seven catches for 85 yards. Michael Nelson-Brown added three receptions for 66 yards and Drake Grisham had 54 yards on a pair of catches.

Samuel led the Red Devils with 165 yards of offense – 92 yards rushing with two touchdowns and 73 receiving yards. Deontavius Hall led all rushers with 106 yards for Central.

Oak Mountain quarterback Jake Adams searches for an open receiver in the Eagles' 34-10 loss to Auburn on Nov. 9.... read more