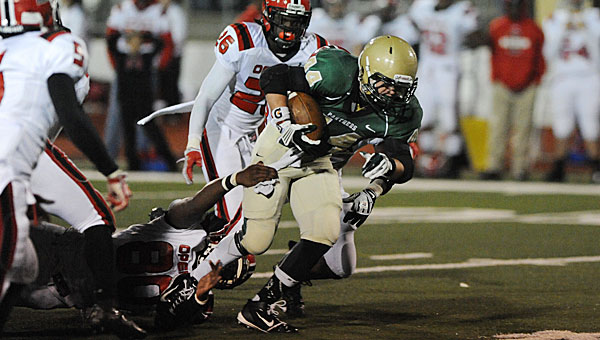 Turnovers plagued the Pelham Panthers as they fell to the visiting Opelika Bulldogs 49-23 on Nov. 9 in the first round of the 6A state playoffs.

“We gave them two touchdowns in the first half, and you just can’t do that against a good football team,” PHS head coach Brett Burnett said. “I’m proud of our seniors. They came a long way, and there’s some things to be proud of this year.”

The Panthers lit up the scoreboard on their first possession on a 4-yard touchdown run by Adams. Austin Bowen’s PAT split the uprights to give Pelham a 7-0 lead.

The Bulldogs then scored 14 unanswered points before Pelham placekicker John Perko connected on a 50-yard field goal early in the second quarter to bring the game to 14-10.

Opelika added two touchdowns, with the help of a recovered Pelham fumble, to take a 28-10 lead.

The Panthers answered late in the second quarter on a 2-yard Adams run and successful Bowen PAT to bring the game to 28-17 at the half.

Opelika added another touchdown to start the second half before Pelham found the end zone on a 23-yard run by Beall just a few seconds into the fourth quarter. Bowen’s PAT fell short, bringing the game to 35-23.

A costly Pelham off-sides penalty on third down on the Bulldogs’ ensuing possession eventually led to an Opelika touchdown, giving the visiting team a 42-23 lead.

Adams was then intercepted on the Panthers’ next possession, but Pelham’s Braxton Hoyett recovered a Bulldog fumble on the Pelham 6-yard line a few plays later.

Adams was intercepted again a few plays later and was run back 40 yards for an Opelika touchdown.

Indian Springs' Reeves Duggan drives to the basket for two of his game-high 15 points in his team's 50-30 win... read more