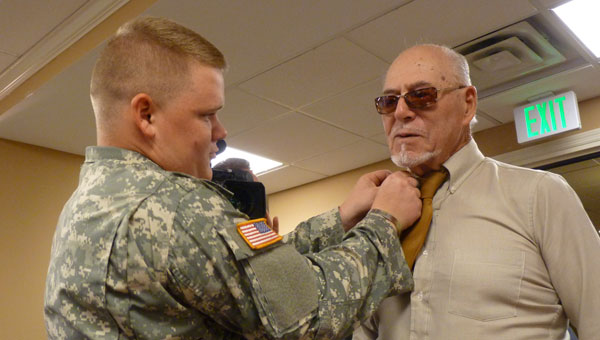 HOOVER — As the veterans began trickling through the doors at Somerby at St. Vincent’s One Nineteen Nov. 6, the 313 Army Band began playing a jaunty tune.

Veterans smiled as they heard the songs of the military, with some clapping or whistling along.

They settled in for Somerby’s Wall of Honor program, honoring the 35 veterans living at Somerby and publicly presenting the New Beacon Hospice’s Heroes Wall of Honor, featuring the veterans’ names and biographies.

“We find it a great privilege to be able to have this event for you,” said Meehan, who invoked President John F. Kennedy’s famous inauguration quote, “Ask not what your country can do for you — ask what you can do for your country.”

Robin Nye with New Beacon Hospice said when she interviewed veterans for the Wall of Honor, they were humble and unassuming about their sacrifices. One man, after saying “he really didn’t do very much,” then told the story of how he had to clear the battlefields of mines.

Suzannah Rawlins with the Daughters of the American Revolution said those are the kind of stories she wants to preserve for future generations.

“On the behalf of the Daughters of the American Revolution, I want to thank you all for your service,” she said. “The DAR was founded in 1890 with the motto of ‘God, home and country,’ and that’s something we try to live every day.”

The 313 Army Band recognized the veterans by playing a medley of the official songs of the armed forces. Veterans from the different military branches stood to be recognized when their songs were played.

Veterans then received certificates of appreciation and special pins for their service.

The program was also sponsored by New Beacon Hospice and the Lily of the Cahaba Chapter of the National Society of the Daughters of the American Revolution.