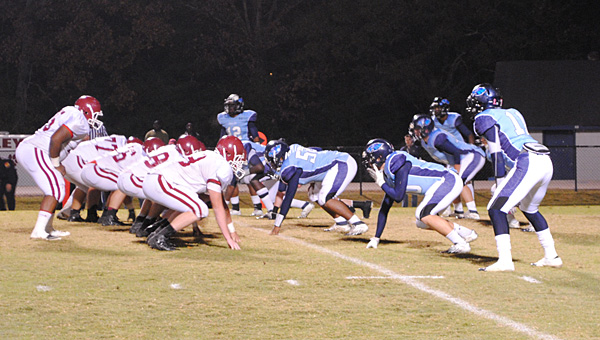 The Calera Eagles' defense lines up against Handley in their 41-34 loss in the Class 4A playoffs. (Reporter photo/Clayton Hurdle)

CALERA – A Trae Kyles touchdown with 15 seconds to go secured Handley a second round date in the AHSAA Class 4A playoffs to propel the Tigers past Calera, 41-34.

“He does everything we tell him to, playing both ways a hundred plays a night,” Handley head coach Mike Battles said. “He had a great game tonight so I’m proud of him.”

Kyles’ fourth touchdown capped a 20-14 fourth quarter in which every drive besides Calera’s desperation attempt ended in a touchdown.

Junior Ronnie Clark set up the drive with a big kickoff return. The scoring play was a 30-yard pass from senior quarterback Zack Reneau to Jordan Bishop.

It took the Tigers just four plays to find the end zone again. Sophomore Jerreion Williams took a handoff 35 yards for the score.

The Eagles took four and a half minutes to tie the score at 34 apiece.

Reneau called his own number on the score, running in from two yards with two minutes left.

“I’ve been thinking all week that this could be my last game,” Reneau said. “I want to go out being remembered throughout this city and set a standard for the program for here on out.”

The ensuing Handley drive became the Trae Kyles show.  Kyles returned the kickoff 68 yards to the Calera 14.  After a five-yard Williams run, Kyles carried the ball on the next three plays, scoring from a yard out on the third.

“Those guys are big and strong and they’re going to put a body on a body,” Calera head coach Wiley McKeller said of the Eagles’ defense coming up short. “Right now, we’re not physical enough to stop people on a consistent basis like that.”

The 41-34 lead would not be safe until the final whistle, however.  The Eagles recovered Handley’s onside kick at midfield and had two shots to score a final touchdown.

Reneau’s pass on first down fell incomplete, intended for Clark.  On the game’s final snap the Tiger defense chased Reneau backfield until Williams and Sedric Tucker combined for a sack to end the game.

The rest of the game was comparatively low scoring.  Handley took a 14-7 lead into the locker room at halftime and capitalized on a turnover for its only score of the third quarter.

On the second half’s opening kickoff, Calera’s Shakeith Tyes fumbled the ball.  The Tigers recovered on the Calera 10 and scored on Kyles’ third rushing touchdown just a minute into the half.

“We’ve done a really good job of taking care of the ball all year, but we had that big turnover there tonight,” McKeller said. “Of course, in a close ball game that was a really big play.”

Meanwhile, Handley (7-4) will advance to the second round to take on 10-1 Beauregard, winners over Andalusia on Friday night.

“It was one of things where it was our night to win,” Battles said. “We’re going to go back, see who’s healthy, put together a plan and try to execute it next week.”

By MICKEL PONTHIEUX / Sports Reporter The Vincent Yellow Jackets scored on their first drive of the game, but was... read more