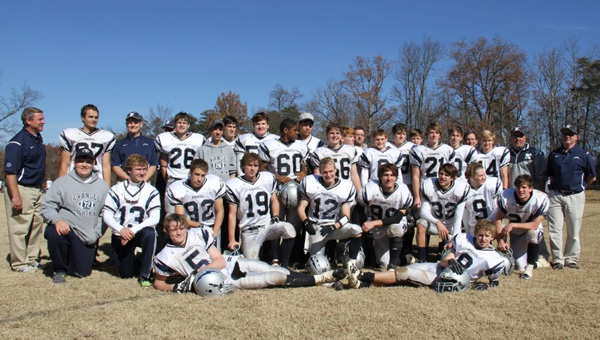 Macon Road took an early 6-0 lead in the first quarter, but the Lightning came roaring back in the second period.

Pete Sullivan rushed the ball in from two-yards out, then added the two-point conversation to give Evangel the 8-6 lead.

After a scoreless third quarter, Brandon Montgomery broke free for a 56-yard touchdown run. Bell added the PAT to seal the 22-6 Evangel victory.

The Lightning out rushed Macon Road 302-96. Montgomery led Evangel with 96 yards on the ground with a touchdown.

The Calera Eagles' defense lines up against Handley in their 41-34 loss in the Class 4A playoffs. (Reporter photo/Clayton Hurdle)... read more