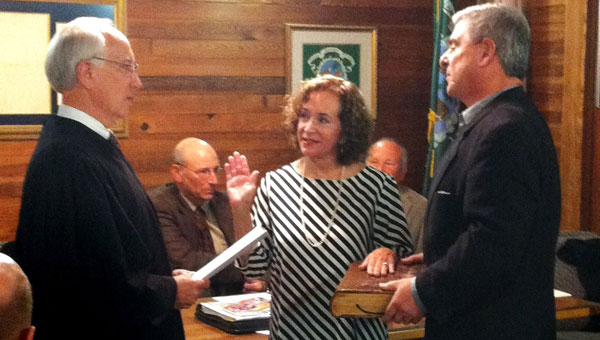 After serving on the town council eight years, Brenda Bell Guercio (pronounced ger’-see-oh) became the first female mayor of Indian Springs. She is the fourth mayor in the village’s 22-year history.

Mayor Brenda Bell Guercio will serve a four-year term. She and the other elected officials of Indian Springs serve without pay, volunteering their time and energy to manage governmental affairs of the community.

As mayor, some of her duties include representing Indian Springs Village at county and state functions, chairing town hall meetings and coordinating activities of the town council, town clerk and Village Voice editor. The mayor also communicates directly with citizens once a month via the “Message from the Mayor” column in the Village Voice newsletter.

“I am a firm believer in a citizen’s right to know,” said Guercio. She is going to do her best to keep all citizens informed of what is happening in the town council and the planning and zoning committee.

In addition to communicating via the newsletter, the new mayor hopes to use email to provide even more information to village citizens. More than 300 citizens already signed up to receive e-mails concerning Indian Springs activities. The mayor encourages every village citizen to sign up for emails by sending a note to myvillagevoice@yahoo.com.

The mayor moved to here in 1989 with her husband and two children, Emily and Bo. A physician, she has retired from her career as a radiologist. Along with being mayor of her town, she happily works at “being nanny” to her four granddaughters (and another one on the way!)