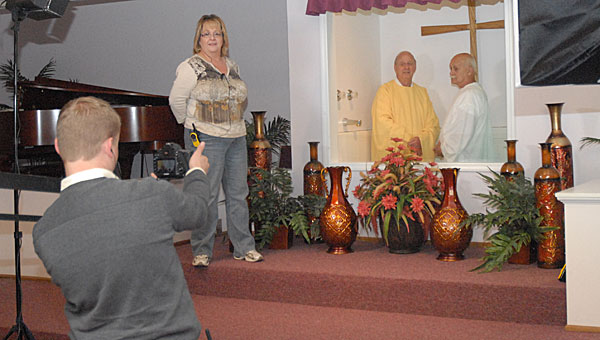 Amazing Grace Worship Center Music Minister Tina Wakefield soon will be hitting televisions and computers across the nation after she worked with a Nashville, Tenn.-based company to record her first music video.

Wakefield, who has been the AGWC music minister for 18 years and has been recording CDs for the past few years, joined several of her friends and family members in the Alabaster church’s sanctuary on Nov. 13 as representatives from Godsey and Associates Media filmed a portion of the music video.

After filming a baptism scene at AGWC, the group joined the congregation of Wildwood Chapel on Shelby County 26 to film other portions of the video to Wakefield’s song “The Choice.”

“This is a first for me,” Wakefield said of filming the video.

The song is about a young woman who is sitting in a church and trying to decide if she will accept Jesus as her savior, Wakefield said. The song, which Wakefield wrote, is on her most recent CD, which is available at Tinawakefield.com.

“The message of the song is you’ll live or you’ll die by the choices you make,” Wakefield said.

In addition to the baptism scene, the video will also include scenes of a full sanctuary at Wildwood Chapel and more. AGWC member Ray Smith, who portrayed the baptizing pastor in the video, opened the filming with a prayer.

After the video is produced, it will air on gospel TV stations across the nation and will be published on Youtube.com, Wakefield said.

Locally, the video will air on the Gospel Jubilee with Al and Sandy Jerkins on the My 68 TV station. After receiving the finished video, Wakefield said she will post links to her Youtube account on her website.

Wakefield said she views her music career as an outreach of her church.

“People seem so unchurched now. It’s like they’ve lost interest in it,” Wakefield said. “I just feel the need to reach out in any way I can.

“With younger people, it seems like video and online reaches them more than anything,” Wakefield added.

The Nutcracker returning to PHS

The Alabama Youth Ballet Company will bring The Nutcracker to Pelham High School for the eighth straight year in early... read more