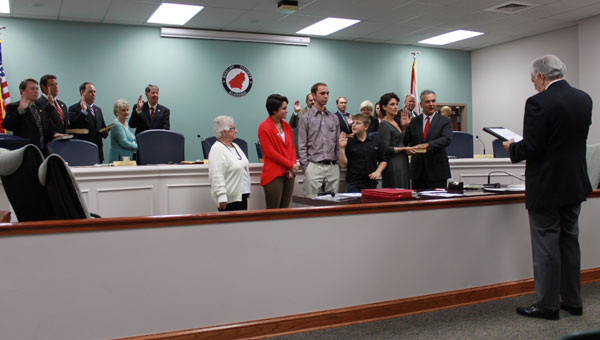 An empty leather chair marked the passing of longtime Commissioner Joel Bearden, as he died Nov. 8.

“It’s bittersweet being sworn in with an empty seat here beside me,” Commission Chairman Corley Ellis said. “We ask for continued prayers for his family. He will be sorely, sorely missed on this commission.”

Because Bearden won re-election to the commission, but had not been sworn in, the District 5 seat likely will be filled by a governor’s appointment, County Attorney Butch Ellis said previously. 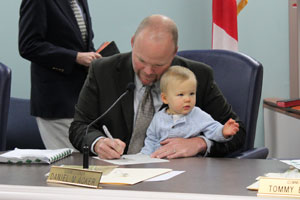 County Commissioner Corley Ellis holds his son, Jamison, has he is officially sworn into the commission Nov. 14. (Reporter photo/Christine Boatwright)

The commission unanimously approved the meeting schedule. The commission will continue to meet on the second Monday of each month at 8:30 a.m. and the fourth Monday at 6 p.m.

During the meeting, the commission took the following action:

-Awarded a bid for the county’s automated external defibrillators to DXE Medical, who submitted the lowest bit at $1,045.

-Awarded the bid for hard steel items to Batey and Sanders Inc., the only responsive bidder.

-Awarded the bid for the Shelby County Exhibition Center roof to Wayne Davis Construction for $81,900.

-Approved a resolution to purchase kitchen equipment services, as no bids were made for the project.

-Awarded bid for the Shelby County Water Services Tank T-1-N repainting and improvements to Jones Valley Industrial Construction for a base bid of $99,500.

-Granted an alcohol license to Eddie Gentry, of EZ Ed’s Grocery and Deli LLC, which is located at 356 Shelby County 54 in Montevallo.

-Appointed Claire Owens to fill the unexpired term of Brenda Bourbon on the Chilton-Shelby Mental Health Board. The term will expire April 1, 2017.