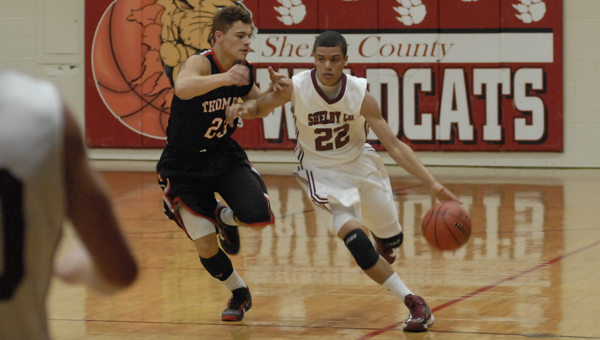 COLUMBIANA – The Thompson Warriors (1-1) jumped out to a big first quarter lead and cruised to beat the Shelby County Wildcats 66-50 at Shelby County on Nov. 13.

“I thought we came out and executed our defensive game plan to keep the ball out of the post,” Thompson coach Patrick Davis said. “They have two bigs that are really good and we were trying to keep it away from them. In the second quarter, they made adjustments and got them the ball, but I thought we did a good job after the half to keep the ball out of the post.  And when it did come in there, we were flying to it.”

Despite the Warriors’ game plan to shut him down, Wildcats’ power forward Tyler Madison still managed to finished with 30 points and seven rebounds.  Madison had several monster dunks that made both teams’ fans jump out of their seats.

“He is simply amazing,” Davis said of Madison.

Thompson’s top four scorers were starters. Marcus Lewis led the group with 17 points while Caleb Johnson added 15 points. Duke Thomas had 14 points and Deandre Gamble followed up with 12 points.  The Warriors only had six points from their bench.

Thompson jumped out to a 6-0 on the Wildcats, less than three minutes into the game.  The Warriors extended their lead to 15-5 before the quarter ended.

The Wildcats’ offense did better in the second quarter as they scored 23 points. Unfortunately for Shelby County, they were still never able to get any closer than eight points to the Warriors and Thompson took a 37-28 into the half.

In the third quarter, the Wildcats got the closest they had been since the first quarter, when on two occasions, they got within five points at 41-36 and 43-38.  But Thompson fought off Shelby County’s rally each time and used an 8-0 run to propel them to a 51-38 lead into the final quarter.

Thompson scored the first seven points of the final quarter and Shelby County was unable to recover.  The Wildcats fell to 0-1 on the year.