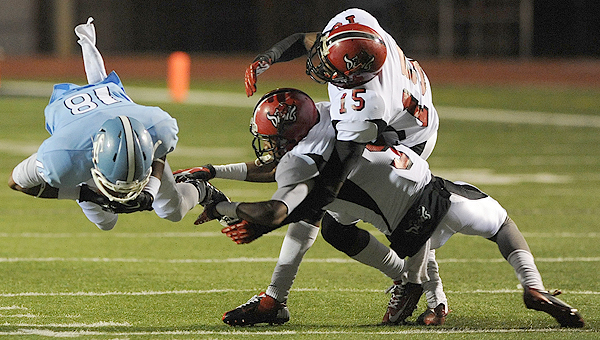 NORTH SHELBY – The Spain Park Jaguars will look to continue a milestone 2012 season on Nov. 16 when they host Foley in the second round of the Class 6A playoffs.

Spain Park will host Foley, who is coming off 30-28 thrilling win over Baker in the first round. Foley led the game 21-7 at the half and won the game when Baker missed a 38-yard field goal with 10 seconds left in the game.

The Lions average 33.8 points a game and have allowed 24.3 points per contest. Foley is led by Cedrix Reed and Nate Cole. Reed rushed for 151 yards and three touchdowns against Baker last week while Cole has a pair of sacks and two forced fumbles on defense.

Friday will be the first ever meeting between the two schools.

Lions await Wolves in second round of playoffs

Briarwood Christian sophomore quarterback Chandler Wilkins has thrown for over 1900 yards for the Lions. (File) By GRAHAM CARR /... read more