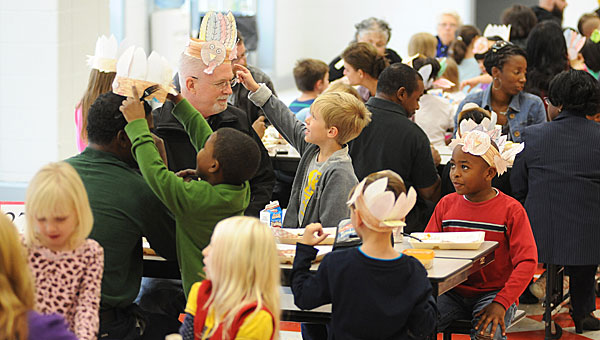 Kids, parents and faculty members at Alabaster’s Meadow View Elementary School celebrated one of the school’s annual traditions on Nov. 14 as teachers and administrators served students and parents Thanksgiving lunch.

During the lunch, MVES Principal Rachea Simms and several of the school’s faculty members put on aprons and served everything from turkey and dressing to sweet tea.

“It’s a tradition. We just want to give back to the parents, because they do so much to support us,” Simms said. “We had one grandparent who said today was her eighth year to attend.

“I’m thankful for my family, my health and for the Alabaster community for all they do for the kids and staff here,” Simms added.

Stephanie Cholewinsi and her first-grade daughter, Marley, said they were thankful for family, health and the chance to spend time together at the school.

“I’m thankful for the food we eat,” Marley added.

Ashley Thomas, who was having lunch with her first-grade daughter, Dailynn Motes, said she was thankful for her two children “and one on the way,” and for an “awesome fiancé.” Motes said she was glad to have a few days off during the Thanksgiving weekend.

Also thankful to get a break from class was Kaden O’Neal, who was having lunch with his uncle, Xavier Smith.

“We were off on Monday (for Veterans Day) too,” O’Neal said, noting he was looking forward to being out of class for a few days for Thanksgiving.

MVES teacher Kathy Belser said she is especially thankful this year, as her son, Branden, has made a near full recovery after be was involved in a serious car accident in April. Branden was airlifted to the hospital after the wreck and was treated in the intensive care unit at Trinity Medical Center, but has recovered and is set to wrestle on the Thompson High School wrestling team this year.