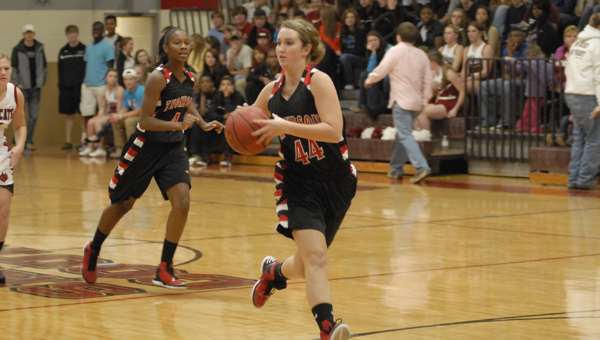 COLUMBIANA- The Thompson Lady Warriors broke away from a fourth quarter tie with the Shelby County Lady Wildcats to win 58-46 at Shelby County on Nov. 13.

After Thompson tied the game at 39 a minute into the fourth quarter, the Warriors then used a 10-3 run over the next four minutes to take command of the game.

The two teams combined for37 turnovers in the first half of play with the Wildcats having 22 of them.  The Wildcats finished the game with 36 turnovers while Thompson had 28 turnovers.

“I feel like we haven’t found our chemistry yet,” Thompson coach Cara Crosslin said.  “It was a close game and hats off to Shelby County they did a good job.  They were aggressive.”

“We couldn’t quite get in sync and Shelby County saw that and capitalized on our weaknesses,” Crosslin said. “We have to go back to the drawing board and adjust a lot of things.”

Despite the loss, Shelby County coach Ashley Phillips was pleased with his team’s effort against their bigger Class 6A counterparts.

“I think Thompson is a little more experienced than we are and it showed,” Phillips said. “We have to eliminate turnovers and learn how to play the game a little better.”

The game started slow as both teams turned the ball over several times.  The result of the plentiful turnovers was only a 6-3 score at the end of the first quarter.   All three of Shelby County’s points were from the free throw line.

The scoring picked up in the second quarter as Shelby County battled to take a 16-11 lead midway through the quarter.  Thompson rallied to tie the score at 16 only to watch Shelby County quickly respond taking a four point lead at 21-17. The Warriors countered with a 9-0 run themselves to take the lead and they did not surrender it the rest of the quarter.  The halftime score was 28-24.

Shelby County opened the third quarter with a 5-1 lead to tie the game at 29 and the teams went the rest of the quarter swapping  the lead.  Shelby County took a 39-37 lead into the fourth quarter.

In the fourth quarter, Thompson was too much as they outscored the Wildcats, 21-7, cruising to the victory.