Lions await Wolves in second round of playoffs 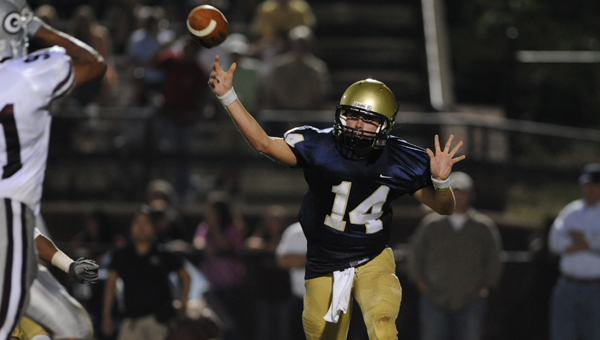 Briarwood Christian sophomore quarterback Chandler Wilkins has thrown for over 1900 yards for the Lions. (File)

NORTH SHELBY – The Briarwood Lions will hope to upset their second straight team when they face the Vigor Wolves in the second round of the Class 5A state playoffs on Nov. 16.  Last week, the Lions upset No. 6 Jackson High School, 31-13.

After a 0-3 start, Briarwood has hit their stride at just the right time.  The Lions (5-6) have won three of their last four games and five of their last eight.

Briarwood sophomore Chandler Wilkins and senior Daniel Robert have established a potent quarterback-to-receiver tandem this season.   Wilkins and Robert have hooked up for 13 touchdowns this season, including two scores last week against Jackson. On the season, Robert has more than 775 receiving yards which accounts for more than 40 percent of Wilkins’ 1915 passing yards.

Vigor (8-3) advanced to the second round matchup by rallying from a 14-7 third-quarter deficit to defeat Valley, 29-14.

The Wolves, last season’s state runner-up, are averaging 27.7 points per game while giving up 19.2 points a game. Vigor will make the 250-mile trip hoping for a big game from star junior quarterback Devin Adams.  The 6-foot-3-inch,  220-pound Adams is being recruited by several SEC schools and considered one of the top quarterback prospects in the 2014 Alabama recruiting class.

Both teams have long histories in the playoffs as this is Briarwood’s 26th appearance, while this is Vigor’s 28th appearance.  Still, this will be the first ever meeting between the Lions and Wolves.

This will be a matchup battle of streaks.  Briarwood has won three straight and 11 of its last 12 games in the second round while the Wolves have won two straight and five of their last seven second round games.