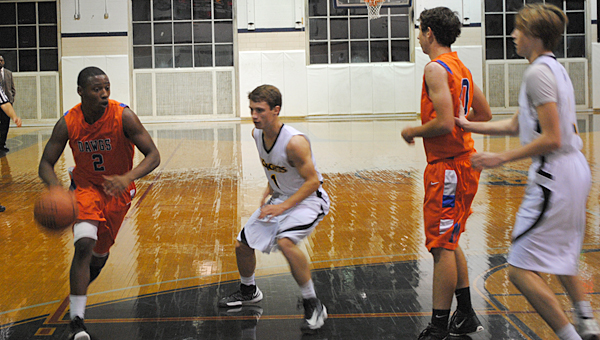 Montevallo's Demetrius Conwell drives to the basket in the Bulldogs' 40-34 win over Westminster at Samford University on Nov. 13. (Reporter photo/Clayton Hurdle)

BIRMINGHAM – The Montevallo Bulldogs got a two-game sweep against the Knights of Westminster at Oak Mountain at Samford’s Seibert gym Tuesday night.

The girls’ team won 42-7 behind 15 points Myia Farrington and the boys’ team got a hard-fought 40-34 win over the Knights.

All of the Lady Bulldogs’ second-half points came in the third quarter, as Westminster outscored Montevallo 2-0 in the fourth.

“We want to display good sportsmanship because we’ve been in their shoes,” head coach Tena Niven said. “Those girls were hustling up and down the floor the entire time.”

The Montevallo boys got off to a 6-0 run to begin their game. The Knights responded with two buckets from Jake Doggett to cut the Bulldog lead to 9-4 at the end of the first quarter.

Westminster got back to within five in the second quarter three times. Ahead 17-12, the Bulldogs broke ahead to a 23-14 halftime lead.

Coming out of the break, the Knights took an 8-1 run to pull within two points of Montevallo.

Stanford’s three-pointer to cut the Bulldog lead to 30-27 catapulted Westminster into the final quarter.  The Knights’ unanswered points streak extended until they were up 34-30 with another three-point shot.

Montevallo tied the game up with buckets from Korey Cunningham and A.J. Green but had trouble sealing the game from the free throw line.

Once the Bulldogs started making foul shots, though, they were red-hot from the line.  Demetrius Conwell and Antwain Cunningham combined to go 6-for-8 for free throws in the waning moments of the game.

“We did not shoot well from the line, but we hit them down the stretch,” Montevallo coach Donald McMahon said. “When we really needed them, the guys stepped up and hit them.”

Stanford and Doggett led all scorers with 12 points apiece for Westminster.  Antwain Cunningham was the leading scorer for Montevallo with eight points.

Knight coach (D.) Butler was impressed by the way his team played against the Bulldogs.

“We’ve got a lot of work to do,” Butler said. “We played a very big, athletic Montevallo team and came up just a little bit short.”