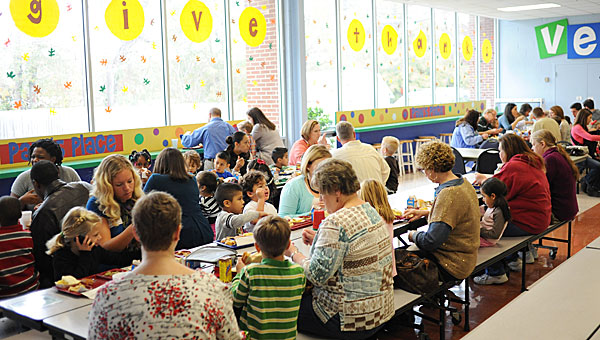 Students, faculty members and parents at Pelham’s Valley Elementary School said they were thankful for everything from city leadership to food during the VES Thanksgiving lunch on Nov. 14.

Kids, many of who were dressed as Native Americans and pilgrims, joined their parents and teachers in the school’s lunchroom to enjoy a feast consisting of everything from turkey and dressing to corndogs and cake.

James and Jennifer League, who were having lunch with their kindergarten son, Talbot, said they were thankful for their family members, their health and their job.

“We’re thankful for a good school, and for the opportunity to come and spend time with Talbot,” said James League.

Also in the serving line were kindergartener Zachary Gurley and his grandmother, Holly Blackmon.

“I’m thankful for my grandparents, my parents and my friends too,” Gurley said as he smiled at Blackmon.

Tara Herrod, who was having lunch with her son, Simeon, said she was thankful for her husband, two children and the opportunity to move to a new house recently.

Brian and Stacy Woodall were dining with their son, Blake, and said they were glad to have freedom, a chance to spend time with family and were thankful for Pelham’s newly elected leaders.

Also sharing thanks were the school’s faculty members, who were enjoying lunch while working to keep the line flowing as efficiently as possible.

“I’m thankful for my family and friends, and for the wonderful teachers here,” said VES English as a second language teacher Jeri Feliciano. “I enjoy spending time with my family.”

VES Assistant Principal John Vincent said he viewed the school’s faculty as a family, and said he was thankful for the opportunity to help educate Pelham’s children.

“I’m thankful for my family, and because I’m able to be around all these wonderful people every day,” Vincent said. “It’s like a family around here.”