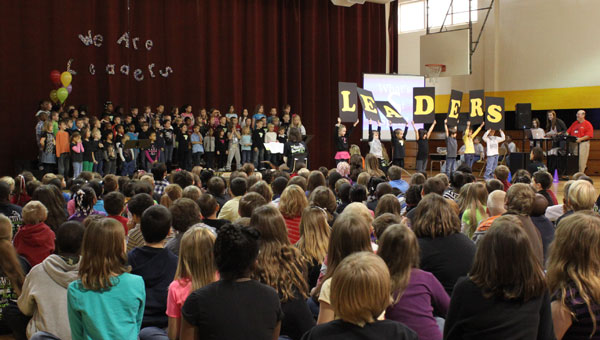 During the second-annual event, each grade performed songs about the “7 Habits of Highly Effective People” for their peers. Vincent Elementary is a “Leader in Me” school, which is a school dedicated to teaching students the seven habits. The habits are as follows: Be proactive, begin with the end in mind, put first things first; thing win-win, seek first to understand, then to be understood, synergize and sharpen the saw.

At least one student from each grade announced his or her academic goal.

Fifth-grader Mady Smith said she aims to change her spelling grade from a B to an A.

“I know I will have achieved my goal when I get an A,” Smith told a gymnasium full of VES students.

Vincent Elementary is striving to become a Lighthouse school. Jane Knight, a consultant with Franklin-Covey, the company responsible for the program, said only 21 schools in the world have achieved Lighthouse status. About 1,100 schools are participating in the 7 Habits program internationally, with 90 in Alabama. Vincent Elementary is the first Leader in Me school in the county.

“It’s a culture change,” Knight said of a school achieving Lighthouse status. “It’s not a class teachers teach. It becomes a part of who they are. Vincent Elementary is moving steadily toward Lighthouse status.”

Students keep notebooks to track and propose future goals, along with action plans to attain their goals.

Kindergarten teacher Amanda Campbell was one of the teachers to begin the program at Vincent Elementary three years ago.

“We don’t want them to just know the habits, but to live the habits,” Campbell said.

Last year, the school had one leadership team for students to join. This year, fifth-graders can be involved in 10 leadership teams, which include anything from technology to environment to safety patrol.

“I think the reason it works is because it’s kid-friendly language for teaching the things we’ve always tried to teach, like responsibility,” Knight. “Responsibility is an abstract idea to elementary minds. You can’t really teach a 4-year-old what integrity means with the word, but you can show them what ‘put first things first’ means.”