Buccaneers firepower too much for rival Spain Park, 57-43 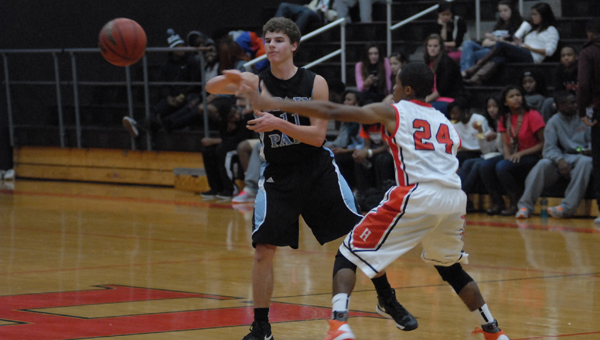 Spain Park senior Drew Morgan passes the ball with Hoover's Alex May defending in the Jaguars' 57-43 loss to the Buccaneers on Nov. 15. (Reporter photo/Graham Carr)

HOOVER – The Hoover Buccaneers overcame an early deficit to run away from the Spain Park Jaguars, 57-43, at Hoover High School on Nov. 15.

The Jaguars had more than 13 turnovers that hurt their offensive rhythm while Hoover had less than 10 turnovers.

Spain Park capitalized on a sluggish Hoover team early as the Jaguars took an early 6-0 lead. But the Buccaneers responded to go on a 17-3 run and took a 17-9 lead into the second quarter.

Spain Park opened the second quarter on a 13-8 run to close the gap to 25-22, forcing Hoover to take timeout.  The Buccaneers answered out of the timeout and hit their final two shots of the half, taking a 30-22 halftime lead.

Spain Park came out a little slow in the third quarter and Hoover capitalized, pushing its lead to 12.  The Jaguars rallied late in the quarter to close the gap to 39-34, heading into the final quarter.

Unfortunately for Spain Park, the Jaguars could not cut any deeper into the Hoover lead, as the Buccaneers opened the fourth quarter with a 10-5 run and the Jaguars never recovered.

The Buccaneers were led by Alex May with 16 points while Jaylen Nalls, Jared Richards and Leonard Wood added 10 points apiece.

Spain Park will try to bounce back at the Rebel Classic next week at Vestavia High School.