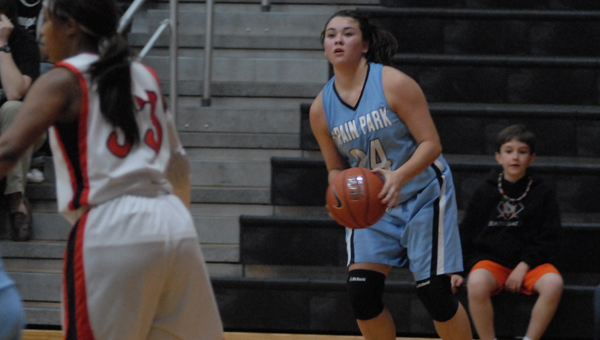 HOOVER – The Hoover Lady Buccaneers jumped out to a big lead and never wavered to defeat the Spain Park Lady Jaguars, 53-20 at Hoover High School on Nov. 15.

Spain Park coach Matthew Chase said he knew his team was over matched against the defending state champions who have several Division I prospects, but wanted the game to be a learning experience for his team.

“I told my kids to try to use the game to get better,” Chase said. “We can’t simulate the size and athleticism in our gym that Hoover presents for us, so let’s play see if we can get some good things accomplished and I think we did that.”

Spain Park fell in a hole early as they trailed 13-2 at the end of the first quarter.

The second quarter proved to be the best quarter for the Jaguars as they scored 12 points.  Trailing 21-4 early on, the Jaguars had a quick 6-0 run when Gaston and Mickens hit back-to-back three-point shots, closing the gap to 21-10.  Spain Park though could not sustain the run and did not get any closer, as the Buccaneers took a 25-14 lead into the half.

The second half belonged to Hoover as the Buccaneers came out on fire, scoring 16 points in the third quarter and 12 points in the fourth quarter, while Spain Park scored only six points in the entire half.

The Buccaneers were led by Marques Webb with 14 points and 14 rebounds.   Eight of the ten Lady Buccaneers on roster ended up scoring.

Buccaneers firepower too much for rival Spain Park, 57-43