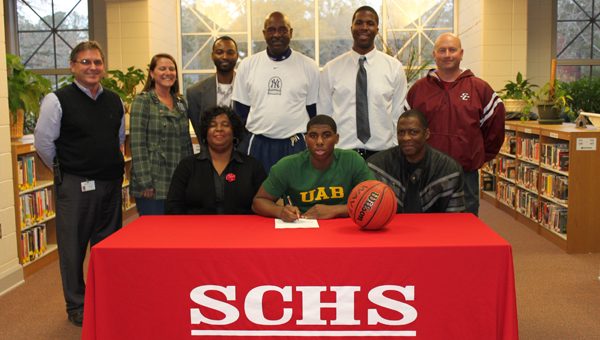 COLUMBIANA – Shelby County senior forward Tyler Madison cemented his commitment to the University of Alabama-Birmingham when the signed his letter of intent during the NCAA early signing period Nov. 14.

“I’m happy about it,” Madison said on signing with the Blazers. “I feel like it’s a good fit for me. I feel that they have a good thing going and are going to bring basketball back to UAB.”

Madison has scored 907 points over his career at Shelby County and averaged 27 points, 13 rebounds and four assists in his junior season.

“Tyler signing is great for him because of all the hard work he has put into his basketball career,” said Shelby County Head coach Torry Brown. “He puts in more time in the off-season than during the season. He’s a great kid and a role model for our other players.”

Madison was recruited by several Division I schools. The Wildcat senior received interest from Murray State, Tennessee Tech, Wright State, Air Force, Tulane and UTEP, but chose UAB because of two important reasons – it’s close to home and the coaches.

“I’m at home – only 30 minutes away,” Madison said. “I’m really comfortable with the coaches and that really played a big part (in the decision).”

He said the interest from so many schools was exciting at first, but was overwhelming toward the end.

Brown said that he believes that Madison’s skill set will carry over to the college level.

“Tyler has a knack to find the basketball,” Brown said. “He’s an extremely aggressive basketball player and has a really good skill set. He continues to develop and get better every day.”

While his career at Shelby County is not over just yet, Madison credits his coaches for the work they have put into putting him into a position to succeed.

“My years at Shelby County have been great,” he said. “I started two years under Coach D (former Wildcats’ head coach Charles Dickinson) and he made me into the player I am today. Coach Brown put me at the wing position to help me get my guard skills up. Both of them played a huge part.”