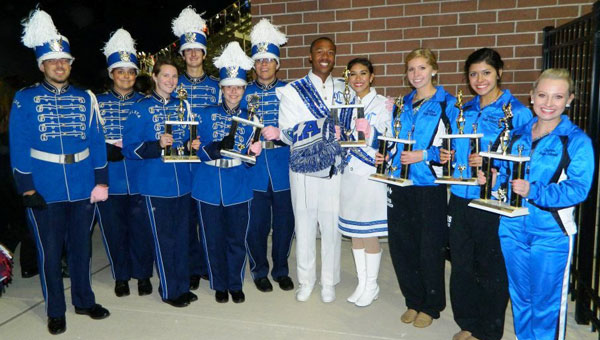 The 131-student marching band has doubled in size since last year, according to Band Director Dane Lawley.

The band traveled to Enterprise High School Oct. 27 to compete with four other bands in the 3A division, as the bands are divided by size.

“It’s the first time we’ve been down to South Alabama in a lot of years. We wanted to see new bands, new faces and new judges,” Lawley said. “We always go to competitions wanting to do the best we can do.”

With 65 freshmen, the band worked hard to compete.

“They’re all good kids, but they’re all young. We’ve had to work a little bit harder,” Lawley said. “Most bands, like Enterprise, they march 10-12 grades. We march 16 eighth graders who march voluntarily.”

Lawley, who has been with CHS for 35 years, said the next two to four years are “looking good” at Chelsea high, and not just for the band.

“It’s an exciting time for the whole Chelsea High School,” he said.

For the first time, CHS has two bands — concert band and wind ensemble.

Since football season has finished, the band is gearing up for a Christmas concert Dec. 7 at 7:30 p.m., which is open to the public. The band will also march in the Chelsea Christmas Parade Dec. 15 at 10 a.m.

“We wear blue hoodies, so we look like the Smurf group marching down the street,” Lawley said with a laugh.