School Employee of the Year honored 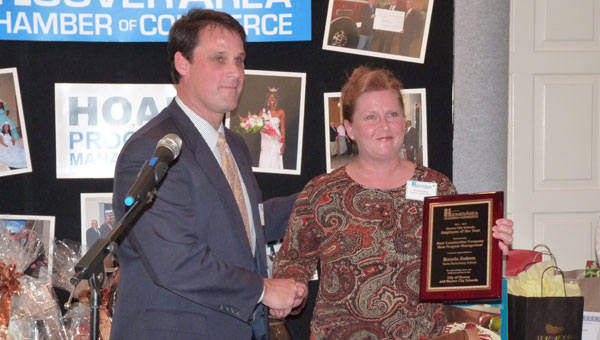 The Employee of the Year is chosen from the school system’s support staff.

“We don’t often get the chance to recognize folks who are the unsung heroes in our school system,” Craig said.

When Craig brought Butters to the front, he brought laughter to the room by asking, “With a name like that, how could you not end up working in a school lunchroom?”

He said Butters oversees the preparation of thousands of meals per week while working under increasingly detailed federal guidelines.

“That means no more French fries,” he said, smiling.

Butters said she has been blessed with constant support from school system officials.

“The people that I work for have always been very positive with me and very complimentary of my efforts,” she said. “I hope whoever you work for, you feel this way also.”

Craig also honored two other finalists for the Employee of the Year award, including Theresa Mareno, the front desk supervisor at Spain Park High School, and Cathy Burnett, a route supervisor for the transportation operations department.