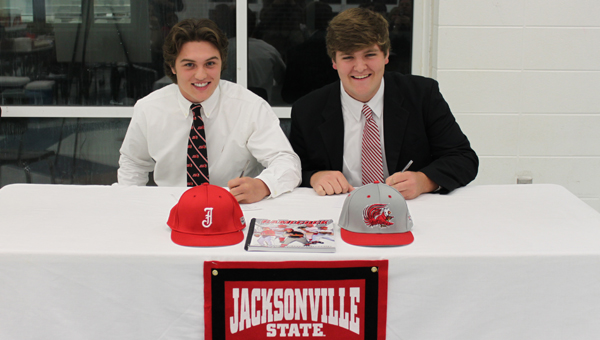 Barrett Gossett and Justin Hoyt signed letters of intent to play at Jacksonville State while Heath Quinn will play for Samford University.

“These three guys have been great to our program,” said Oak Mountain head coach Brian Breeze. “They have been leaders since their sophomore season. I expect the same thing when they go on to play at Samford and Jacksonville State.”

The Gamecocks recruited Gossett as an outfielder at a Jacksonville State camp during the summer.

“It’s something I’ve always wanted since I was young,” Gossett said of signing to play college baseball. “It’s just a big relief to finally sign. My career is not over after high school.”

“I had a really good outing each time I went out there,” Hoyt said. “They had a lot more interest in me after that.” 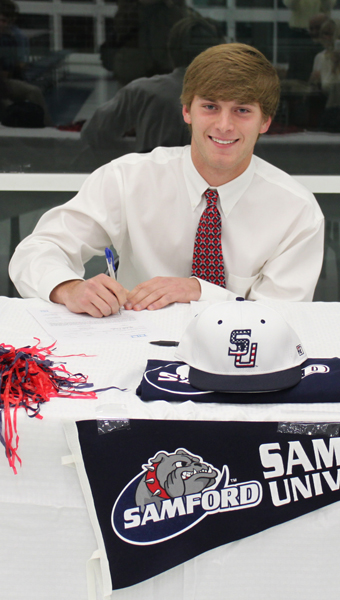 Quinn signed and will play outfield for Samford. He received an offer from the Bulldogs after playing at baseball showcases.

“It’s a good opportunity to play at the next level,” Quinn said. “I got to do a bunch of stuff this summer.”

He added that staying close to home played a factor in his decision.

“Heath is going to be one of the top players in our area this spring,” Dunn said in a press release. “He is a very athletic kid that is going to develop into a power bat at our level. Heath is another guy from a great family and is a young man of high character that is going to be a great fit with our team.”

Breeze summed up each of the Eagle signees into one word.

“Heath is driven – just his work ethic alone speaks for itself,” Breeze said. “Justin is fearless. Anytime we put his foot to the fire, he has always come through. Barrett is a competitor. He does whatever it takes to win a ball game or be a great teammate.”

Breeze said that the Nov. 14 signings by Gossett, Hoyt and Quinn serve as inspirations to the younger Eagle players.