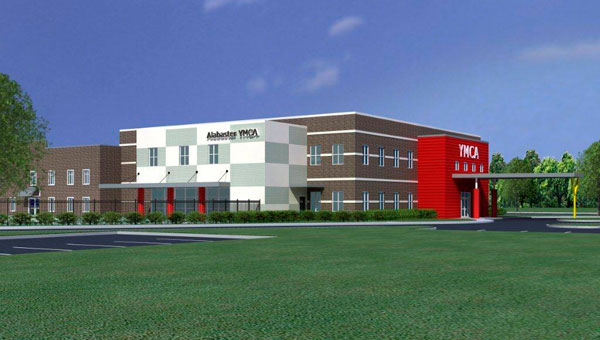 Crews are set to finish a new addition to the Alabaster YMCA branch off Plaza Circle in January. (Contributed)

The new expansion at the Alabaster YMCA is nearing its final stages of completion, and is set to open near the end of January, an organization official said on Nov. 15.

The Alabaster YMCA in 2010 moved most of its programs from a small building near the former Siluria mill site to the former Body Shop gym building on Plaza Circle.

Currently, crews with JohnsonKries Construction and Turner-Batson Architects are working to build an 18,000-square-foot addition to the former gym building.

YMCA District Vice President Lane Vines said the construction project has not suffered any setbacks, and said construction crews have nearly finished work on the outside of the new wing.

“The project is on the interior finishes phase right now, which includes things like paint, flooring, lighting, plumbing, things like that,” Vines said. “It’s looking really good out there.”

Once completed, the new addition will more than double the size of the Alabaster YMCA branch, and will add additional parking to accommodate the larger crowd. Once the new parking areas are added, the branch will have about 170 parking spots, Vines said.

The project will also add a new six-lane pool in front of the building, much like the one at the Pelham YMCA branch, Vines said. The first floor of the new expansion will house the YMCA’s child care programs, and will include a half-court gym

The second floor will house the DAY Program for at-risk youth, which currently operates in a building near the Alabaster Senior Center.

The Shelby County Commission agreed several months ago to donate $200,000 to help construct the second floor. The Shelby County Board of Education also donated $200,000 for the project, and the DAY Program contributed $450,000 in capital funds.

“The DAY Program should move in toward the end of January too,” Vines said. “I imagine they will be up and running by early February.”