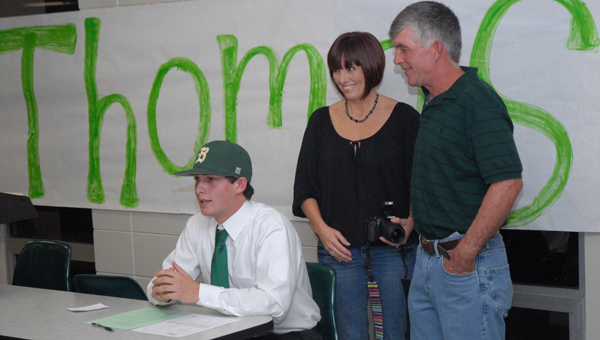 Pelham senior left-handed pitcher Thomas Lowery signed a letter of intent to play baseball at the University of Alabama-Birmingham Nov. 15. Pictured with Lowery are his parents Michelle and Tommy Lowery. (Reporter photo/Mickel Ponthieux)

PELHAM – Pelham High School senior Thomas Lowery signed a national letter of intent to play baseball at the University of Alabama-Birmingham during a ceremony in front a crowd of family, friends and teammates Nov. 15.

“I’m very excited to be signing with UAB,” said Lowery. “Coach (Brian) Shoop, Coach (Perry) Roth and Coach (Josh) Hopper have blessed me with the opportunity to play at the next level.”

Lowery was the first player of the 2014 class to sign a scholarship to UAB.

The Pelham senior left-hander had a stellar junior season with an 8-1 record and a .83 ERA with 93 strikeouts. UAB head coach Brian Shoop called Lowery “the best pitcher in the Birmingham area.”

“Thomas is a bulldog, extremely competitive and obviously extremely successful,” Shoop said in a press release. “He has the ability to throw three pitches for strikes and has been a winner all of his life.”

Lowery was recruited by Auburn, Alabama and South Alabama, but ultimately committed with UAB because of his family.

“It’s close to home and I like that my family can see me play whenever they want,” he said.

Lowery said that playing for the Panthers as a starter for four seasons will prepare him to play at the collegiate level.

“You are playing against the best baseball,” said Lowery. “You are playing topnotch players that are making you better. It’s been a great three years and I’m looking forward to my senior year.”

Spain Park senior Ashley Gaston shoots a three-pointer in the Jaguars' 53-20 loss to the Hoover Buccaneers on Nov. 15.... read more