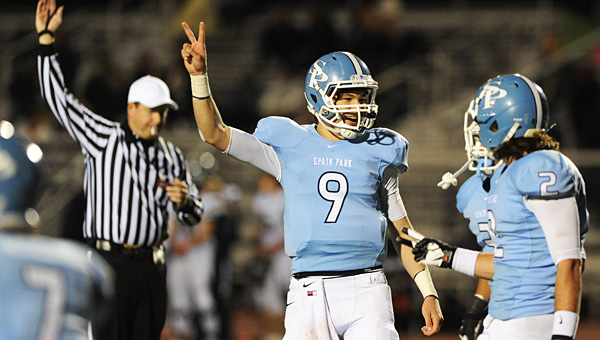 Spain Park quarterback Nick Mullens celebrates with his teammates during the final drive of Jaguars' victory over Foley on Nov. 16 at SPHS. (Reporter Photo/Jon Goering)

NORTH SHELBY – The Spain Park Jaguars were able to withstand a fast start by the Foley Lions to claim a 39-21 Class 6A second round playoff victory Nov. 16.

“It’s a great night to be a Jaguar,” said Spain Park head coach Chip Lindsey. “We continue to fight and improve. We made enough plays to win the game.”

Foley (8-4) jumped out to a 7-0 lead when Maison Taylor connected with Alontai Adams for a 63-yard touchdown pass on just the second play of the game.

The Lions extended their lead on their next possession when Cedrix Reed scored on a 19-yard touchdown run for a 14-0 advantage.

Spain Park (10-2) struggled on offense on their first drive, but was set up nicely by a 53-yard kickoff return by Austin Haight. Haight’s return and a personal foul penalty set the Jaguar offense at the Foley 24-yard line. Three plays later, Nick Mullens found Cade Hoffman for a 6-yard touchdown to cut the Foley lead to 14-7.

Foley quickly answered when Reed took the ensuing kickoff 95 yards for a touchdown for a 21-7 Lions lead with three minutes remaining in the first quarter.

Mullens led the Jaguars back down the field by completing 4-of-5 passes on the next Spain Park drive. The senior quarterback completed the drive with a 19-yard pass to Drake Grisham for a touchdown to pull within a touchdown, 21-14, at the end of the first quarter.

The Spain Park defense picked up a stop to start the second and Mullens quickly cashed in on the opportunity. He found MJ Brown on a 38-yard touchdown pass to tie the game, 21-21.

The Jaguars played the field position game for most of the second quarter and was able to take advantage. Spain Park began their third drive of the period at the Foley 35 and Mullens led his team right down the field on three straight completions, capped by a 7-yard scoring pass to Grisham to give the Jaguars their first lead of the game, 27-21 at the half.

Mullens said that despite the early deficit, the Jaguars’ confidence never wavered.

“In Coach Lindsey’s offense, we know our abilities,” he said. “We scored fast and we had faith that everything will work out.”

It took Spain Park three plays in the second half to add to their lead. Mullens connected with Brown as he pulled away from the Foley defense for a 64-yard touchdown pass. A failed two-point conversion made the score 33-21.

Mullens found Brown again for a touchdown on the Jaguars’ next drive. The duo connected for a 5-yard score to extend the lead to 39-21.

“Our offensive line really stepped up,” Mullens said. “We have a team of really tough guys that are never going to give up. We are just going to keep working,”

With the win, the Jaguars move on to the 6A quarterfinals where they will take on Carver-Montgomery.

“We are excited and thankful to play another week,” Lindsey said on advancing to the quarterfinals. “We will have another great opponent and we have to be ready to go.”

Mullens totaled 247 yards on 17-of-22 passing with six touchdowns.

Otis Harris led all rushers with 68 yards on 17 carries.