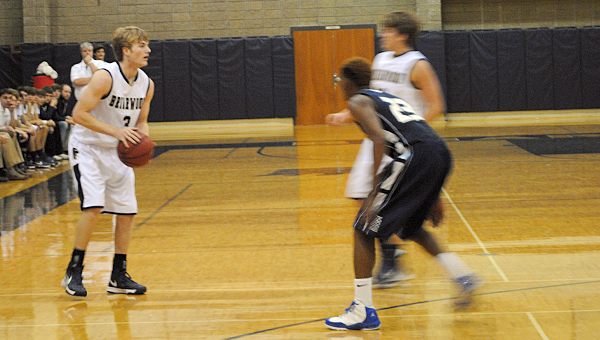 Leading 41-38 at the end of the third quarter, the Lions went on an 11-2 run to open the fourth. David Loveless hit a three-pointer to start the run and Justin Hild contributed two buckets in the streak.

Loveless led Briarwood scorers with 14 points; his totals included four baskets from behind the arc.

Also reaching double digits in scoring for the Lions was William Lathem with 13. Josh Daniel led all scorers, getting 19 points in a losing effort for the Blue Devils.

Briarwood jumped out to a 13-9 lead at the end of the first quarter after falling behind 5-0 early on.

Moody caught up with their hosts, outscoring the Lions 19-13 in the second quarter to take a 28-26 halftime lead.

A key part of Moody’s second quarter was a streak of 10 unanswered points led by two Daniel buckets.  Daniel reached double-digit scoring in the streak, at one point accounting for 11 of the Devils’ 19 points.

Free throws from Will Imbush and Josh Laatsch broke a 38-38 tie and put the Lions up by three to finish the third quarter.

After the 11-2 streak to open the fourth, Briarwood held off a Moody comeback, keeping the ball for extensive amounts of time on offense to secure the home win.

“Our guys were challenged to play with a little bit more passion and energy in the second half,” Briarwood head coach Chris Laatsch said. “They responded and did that, and were able to hold off at the end.”

A challenge for Moody was overcoming foul trouble. The Blue Devils sent Briarwood into double bonus in both halves and D.Q. Swann fouled out during the fourth quarter.

“It makes a difference when our bigger guys get in foul trouble and other guys have to come off the bench to pick up the load,” Moody head coach Shane Traylor said. “We just have to keep working on getting better.”

Chelsea's Ethan Brown runs down the court after a steal in the Hornets' 79-71 win over Holy Family Nov. 17.... read more