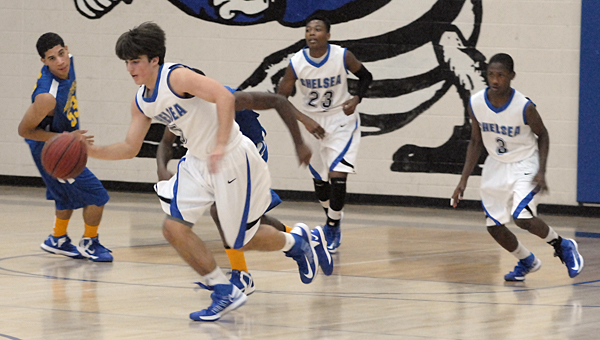 Chelsea's Ethan Brown runs down the court after a steal in the Hornets' 79-71 win over Holy Family Nov. 17. (Reporter photo/Mickel Ponthieux)

CHELSEA – The Chelsea Hornets picked up their first win of the season with a 79-71 victory over Holy Family to open the North Shelby Tip Off Nov. 17.

The Hornets scored four quick points to start the final period to extend their lead to eight, 60-52. After Holy Family cut the deficit down to four, 68-64, Chelsea went on a 7-0 run for a 75-64 score with two minutes remaining.

Holy Family outscored Chelsea 7-4 in the final two minutes, but it wasn’t enough to overcome the double-digit deficit as the Hornets claimed the 79-71 win.

The Hornets will take on Briarwood on Monday, Nov. 19 at Briarwood Christian at 6 p.m.

By MICKEL PONTHIEUX / Sports Reporter The Evangel Christian Lightning opened the 2012 season with a 52-46 victory over North... read more