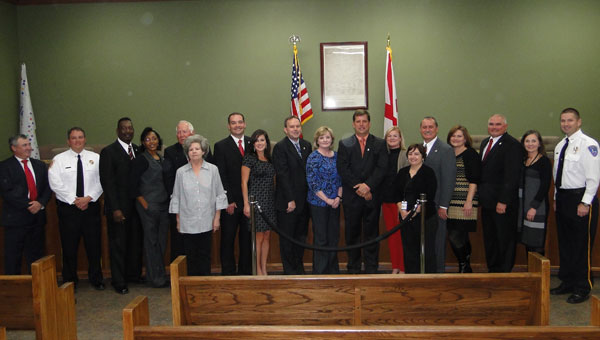 The city of Calera’s newly elected city officials and their wives at a reception held in their honor. (Contributed)

This Thanksgiving season, let us reflect on God’s sustaining love, our country’s freedom and the many blessings we enjoy. Count your many blessings. Name them one by one, starting with the very breath in your body to the pillow on which you rest your head at night. We have so much to be thankful for each and every day.

This year brought more changes than just the changing seasons. The City of Calera’s newly elected officials took the oath of office in a council meeting on Nov. 5. Family members were present and stood alongside as they were sworn in.

Council sessions and meetings will continue be held the first and third Monday of each month, but with a change in time- the session at 6 p.m., followed by the meeting at 6:30 p.m. The council set 5 p.m. on the Wednesday prior to the meeting as the cut-off time for submitting items for the council meeting agenda.

Following the meeting, a reception was held to honor the mayor and city council.

Christmas is going to the dogs

By MOLLIE BROWN / Community Columnist Pets are family members, so why not include them in your holiday pictures? Photos... read more