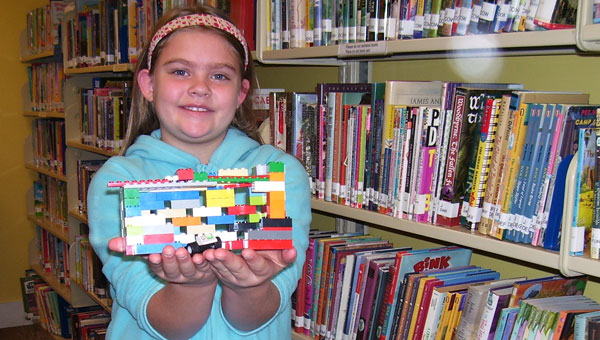 Nine-year-old Keeghan Messer shows off “The Cobra,” her creation from the first meeting of Chelsea Library’s Lego Club. (Contributed)

Dana Polk, Chelsea Public Library director, was wanting to do something special for children at the library when Tracie Rowe approached her with the idea of starting a Lego Club, she said. She liked the idea but had to wait awhile to work on it because of other things that were going on.

But finally, the time seemed right, and the first meeting of the Chelsea Public Library Lego Club was held in the kids’ department of the library on Saturday, Nov. 10.

“Close to 20 kids came, about half the group girls and half boys,” Dana said. “And a representative from the Lego Store at the Galleria was here.”

Nine-year-old Keeghan Messer built a multi-colored creation she called “The Cobra,” which is being displayed along with designs by other club members between club meetings.

Meetings will be held the second Saturday of each month at 9:30 a.m., with free play on second Wednesday afternoons (the Wednesday after the club meeting) 2-4:30 p.m. The club is limited to ages 5 and up.

Tracie Rowe and her husband, Joseph, are leaders for the group.

If anyone has Legos or Duplo blocks they no longer use, the Lego Club can make good use of them. You may drop them off at the library located on Weldon Drive across the parking lot from Chelsea City Hall, call 678-8455 or email chelsealibrary.al@gmail.com for more information about the club or for donating Lego or Duplo blocks.

You might also like to drop in at the library to look at the creations by the kids from the Lego Club and view the photography exhibit from the Shelby County Arts Council.

Teacher of the Year award winner thankful for gift of teaching