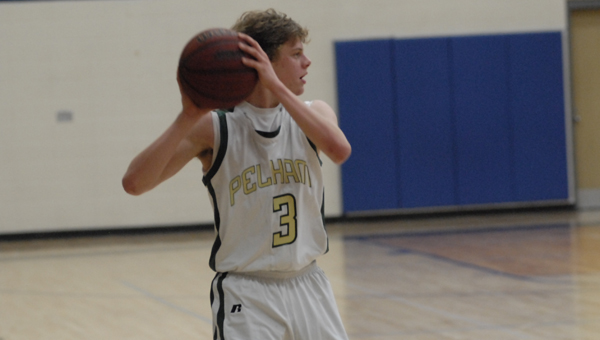 Pelham's Jon Taylor Kepler scans the floor in the Panthers' 73-69 victory over Tuscaloosa County in the second round of the Chelsea Tip-Off tournament Nov. 19. (Reporter photo/Graham Carr)

PELHAM – The Pelham Panthers survived a late run by the Tuscaloosa County Wildcats to win 73-69 in the second round of the North Shelby Tip-Off tournament at Chelsea High School on Nov. 19.

The Panthers led by as much as seven in the fourth quarter at 58-51 with four and a half minutes remaining, but the Wildcats were able to fight back, tying the game 61-61 with just under three minutes left.

Pelham was poised though and gained the lead with a free throw at the 2:33 mark and never surrendered it.

Panther’s coach Joel Floyd was proud of how his team played, but he said this early in season, his team will not be perfect.

“We played ugly basketball at times,” he said. “I liked how we found a way to win at the end.”

In the early going, Tuscaloosa County jumped up on the Panthers, taking a 4-0 lead.  The Wildcats held onto the lead for much of the first quarter, before Pelham rallied in the last minute, taking their first lead at 14-13 lead into the second quarter.

Tuscaloosa County regained the lead with a three-pointer on its first possession of the second quarter, but again the Panthers regrouped to take a 21-16 lead with five minutes left in the half.

Tuscaloosa bounced back to outscore Pelham 12-6 the rest of the half, taking a 28-27 lead into the half.

The Wildcats came out on fire quickly taking a comfortable 35-30 lead, but again Pelham had an answer as they chipped away to tie the game at 37.

The back-and-forth battle was halted after that as Pelham took control of the game on a 21-14 run.  Guard Justin Brooks had ten points in the run keeping the Wildcats from making a run of their own.

Tuscaloosa County was finally able to have one last rally, but it came up just short, and the Panthers prevailed.

Brooks led the way for the Panthers with 17 points.