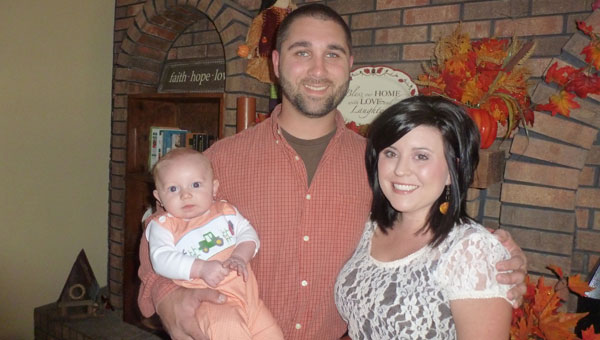 Heath and Patti Smith with baby Gunner in their home decorated for Thanksgiving. (Contributed)

Patti, daughter of Becky and David Lawley of Columbiana, needed a date for her senior prom at Shelby County High School. A friend set her up with Heath, a 2005 graduate of Cornerstone Christian School and son of Coach Tim and Angie Smith of Wilsonville. Within eight months, Patti and Heath were engaged and married on Feb. 23, 2008.

The Smiths wanted children. Instead, they experienced frustrating years of dealing with fertility issues. By the summer of 2012, they realized the odds of getting pregnant were slim without God’s intervention because of Patti’s severe endometriosis, ovulation and progesterone problems.

God had already answered their prayers for home and work. They moved into their beautiful home in 2011. Heath was hired by Alabama Power the next spring, a job he had prayed for for years, and Patti works at Seventh Heaven as a stylist.

On June 24, the miracle began as a woman who had chosen life gave birth to a baby boy and made the courageous decision for adoption for others to care for him as she could not. The same night Patti prayed and gave her desire for a child to God.

“I let it go. I knew that we would be parents by adoption or on our own, in God’s time and by His will,” said Patti.

Heath got up up early on the 25th and prayed, “Lord, if it is your desire for us to have a child who needs a home, please lead us to him.”

Neither knew the other had prayed. At 8 a.m., a friend called Patti and said she knew of a newborn that needed a home. By nightfall, custody was granted to the Smiths. The new family came home on June 26th, and Gunner was formally adopted on Sept. 26.