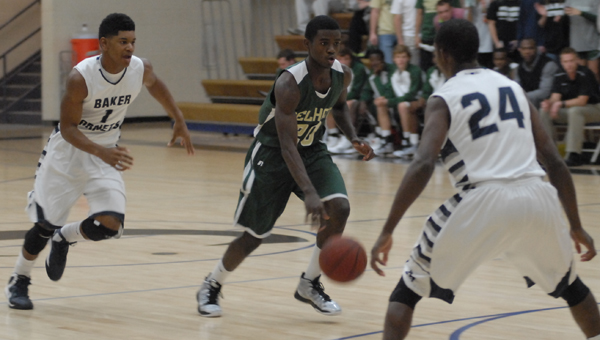 CHELSEA – The Pelham Panthers held off a fourth-quarter Baker rally to take a 59-50 victory at the North Shelby Tip-off tournament Nov. 20.

The win advanced the Panthers to the tournament championship game against Mountain Brook Nov. 21 at Briarwood Christian.

The Panthers led by seven, 23-16, at the half and Baker began to chip away at the Pelham advantage. The Hornets’ Darnay Hayes hit back-to-back 3-pointers to cut the deficit to three just a minute into the third quarter.

Pelham was able to extend their lead back to seven in the late stages of the period, but Baker went on a 7-0 run to even the game at 31-31. The Panthers went 3-for-4 at the line to take a 34-31 lead into the fourth.

The first two minutes of the final quarter saw four lead changes before the Panthers took control of the game. Pelham scored five unanswered points capped by a Justin Brooks three from the top of the key to give his team a 45-41 lead.

Baker pulled within three twice in the last four minutes, but Pelham pulled away with a 12-6 run to take the 59-50 win.

FROM STAFF REPORTS MONTEVALLO – The University of Montevallo men’s soccer team has been honored for its success in the classroom,... read more