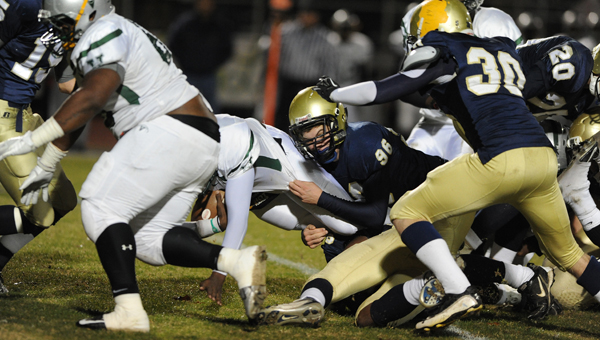 Briarwood Christian junior Daniel Scott tackles a Vigor ball carrier as Collier Smith moves in to assist. The Lions will travel to Mobile to take on the St. Paul's Saints Nov. 23 in the Class 5A quarterfinals (Reporter photo/Jon Goering)

NORTH SHELBY – The Briarwood Christian Lions hope to continue their dream run against St. Paul’s Episcopal School in Mobile on Nov. 23 in the quarterfinals of the Class 5A state playoffs.

Briarwood’s playoff run has been somewhat unexpected, considering the Lions had to win its last region game against John Carroll just to make the playoffs.  Despite slicing into the postseason, Lions have played the underdog role well as they have upset No. 6 Jackson and Vigor in consecutive weeks.

Briarwood had no trouble defeating Jackson, 31-13, in the first round, but last week’s second round victory against Vigor was one for the ages.

After trailing for much of the game, Briarwood drove the length the field to score, capped off by quarterback Chandler Wilkins finding Sam Morris in the back in the end zone for a 4-yard touchdown pass with six seconds remaining to give the Lions the 14-13 victory.

Wilkins has been solid in the playoffs completing 29-of-50 passes for 337 yards with five touchdowns and two interceptions.  His favorite target all season has been the sure-handed senior Daniel Robert who has 59 receptions for 855 yards and 12 touchdowns.

The return of junior quarterback Will Edwards has added another dimension to the Lions’ attack.  Edwards was the starter in Briarwood’s jamboree game against Vestavia in August, but he sustained an injury during the game and had not been able to play until last week’s game against Vigor.

Against Vigor, Edwards was mostly asked to run picking up 27 yards on 7 attempts.  He threw one nice deep throw to Daniel Robert, but it fell incomplete. The change of pace of Edwards kept the Vigor defense off balance.

The Saints (10-2) have gelled at just the right time winning four straight, since its 20-17 overtime loss to Vigor on Oct. 19.  The Saints have won all four games by at least 21 points and won its two playoff games by combined score of 74-19.

St. Paul’s has a potent offense that is averaging 33.6 points per game led by quarterback Bradley Padgett and a stable of running backs in Jordan Huff, Ostin McPherson and Austin Moseley.

The stingy Saints’ defense only gives up 11.1 points a game led by a one-two punch on the defensive line in end Troy- commit Bryan Slater and tackle Jared Holloway, who is being recruited by Air Force, Army and several Football Championship Subdivision.

History will be on both teams’ side with the Lions holding the edge in the overall record in the quarterfinals at 9-4 compared to St. Paul’s 3-4 record, while the Saints hold a 7-1 edge in the head-to-head matchup against the Lions.  The last time the two met was in the 2007 state championship with St. Paul’s winning 14-13.

Alabama quarterback AJ McCarron is an alumnus of St. Paul’s. McCarron played for the Saints from 2006−2008.