Out of the Darkness Walk raises $138k 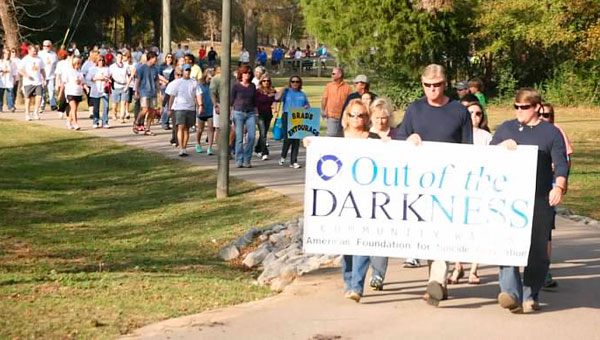 This year's Out of the Darkness Walk has raised $138,000 for the American Foundation for Suicide Prevention. (Contributed)

NORTH SHELBY — This year’s Out of the Darkness Walk eclipsed last year’s event in terms of attendance and funds raised.

According to Kelsey Allison, a member of the Alabama Board of Directors for the American Foundation for Suicide Prevention, the walk, held Nov. 4 at Heardmont Park, saw 1,651 attendees and has raised $138,000 so far. Money can still be turned in to count toward the walk’s funds until Jan. 1.

The money raised this year will go toward a state suicide prevention curriculum for high schools and colleges, training for school personnel to recognize warning signs of suicide in students, training for mental health professionals, primary care providers and military health care professionals, research grants and the foundation’s Survivor Outreach Program, among others.

Allison said it “meant a lot” to her that the event saw such increases in attendance and funds raised.

“Without the couple that started this (event) in Birmingham, I wouldn’t be here,” she said. “I feel like I have an opportunity to do that for other people.”

Next year’s walk will be Nov. 3, 2013 at Heardmont Park. Allison said event organizers will begin planning the walk in May 2013.

She said the walk is of utmost importance because it provides a place where talking about suicide is encouraged.

“First and foremost, it’s having a place for survivors to come to, because no one ever talks about suicide until after it happens,” she said.

For more on the walk or on the American Foundation for Suicide Prevention, visit Afsp.org.