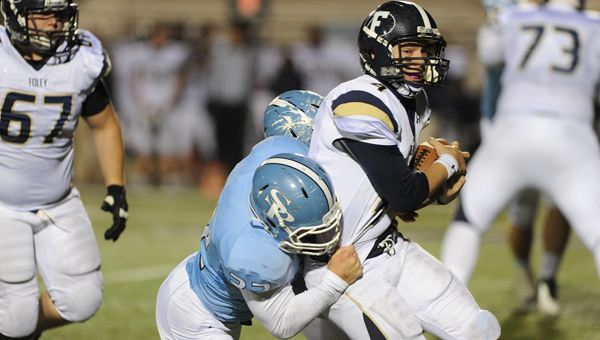 NORTH SHELBY – The Spain Park Jaguars are one of eight teams remaining playing football in Class 6A, and they wouldn’t have it any other way.

The Jaguars (10-2) will travel for the first time in the playoffs when they take on Carver-Montgomery Nov. 23.

“It’s awesome,” said senior quarterback Nick Mullens on playing the week of Thanksgiving. “I’ve never made it that far in my career. We are looking forward to playing a great opponent. We just have to keep bonding and we will be okay.”

The Carver Wolverines (11-1) present a challenge to the Jaguars led by Auburn-commitment Jeremy Johnson.

Johnson has thrown for 2,664 yards and 30 touchdowns on the season along with 567 yards rushing and six scores. The senior quarterback paces a Carver offense that averages 43.2 points per game.

Last week, Johnson led his team into the quarterfinals with a last-minute scoring drive. Johnson was 4-for-4 on the 60-yard scoring drive to give the Wolverines a 20-16 win over Fairhope.

Johnson has a plethora of weapons led by Harvey Harris and Draequon Murphy. Harris leads all rushers with 1,382 yards and 17 touchdowns while Murphy has a team-high 785 yards receiving and nine touchdowns.

Landy Capetillo has a team-high 11 receiving touchdowns on 39 catches for 741 yards.

Carver has gotten tests from each team they have faced in the playoffs. The Wolverines had to score a touchdown in the last five minutes to defeat Stanhope Elmore in the first round before last week’s thrilling finish against Fairhope.

The Jaguars are primed to present the same challenge to the Wolverines. Spain Park is averaging 41 points a game in the playoffs with 424 yards of total offense.

Mullens has thrown for 527 yards with six touchdowns in two playoff games. Otis Harris has rushed for 116 yards and four scores in the postseason. MJ Brown leads Jaguar receivers with six catches for 163 yards and three touchdowns.