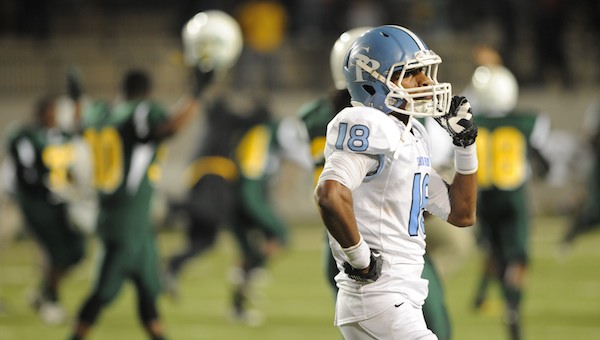 MONTGOMERY – The Spain Park Jaguars had two chances late in the fourth quarter to even its Class 6A quarterfinal playoff game against Carver-Montgomery, but was unable to get the ball in the end zone to fall 26-20 at the hands of the Wolverines Nov. 23.

“It was a great team effort,” said Jaguars’ head coach Chip Lindsey. “It’s not surprising that our kids fought all the way to the end.”

Spain Park (10-3) trailed 26-13 at the half, but held Carver scoreless in the second half to put themselves in position to win the game.

The Jaguars moved within a score on their first drive of the third quarter when senior quarterback Nick Mullens led his Spain Park offense down the field. Mullens connected on 3-of-4 of his passes on the drive to put the Jaguars at the Carver 5-yard line where Otis Harris punched the ball in for the touchdown. Thomas Taylor added the extra point to make the score 26-20.

That score stood through the rest of the third and into the fourth.

Spain Park’s first shot to score came midway through the final quarter. Mullens completed three straight passes to bring the Jaguars to the Carver 22. That would be as close as Spain Park would be able to get as Mullens was sacked by Carver’s Johnny Grant for a 12-yard loss to knock the Jaguars out of field goal range.

The Spain Park defense gave their offense another chance at the end zone when they stopped the explosive Wolverine offense. The Jaguars started their final drive at their 4-yard line with 2:38 left in the game.

Mullens completed passes of 12, 15 and 18 yards and was aided by a pass interference penalty to move the ball to the Carver 45 with just over a minute left. The senior hit Drake Grisham for a 10-yard pass on third down, then found Harris for a 9-yard gain to the 23-yard line with under 30 seconds remaining.

That would be all the offense the Jaguars would muster as Carver’s pressure on Mullens forced four incomplete passes to preserve the 26-20 win.

“We would like to say that we ran out of time,” said Lindsey. “Carver played real good defense and we couldn’t punch it in at the end.”

The Wolverines jumped out to a 13-0 lead after the first quarter led by Jeremy Johnson, an Auburn-commitment.

The Jags scored on their first possession of the second quarter when Je’Niah Jackson recovered a Johnson fumble. Taylor made a 26-yard field goal after Spain Park stalled at the 11 to make the score 13-3.

After Carver extended the lead to 19-3, Spain Park scored their first touchdown of the game. Mullens capped a nine-play drive with an 8-yard touchdown pass to Cade Hoffman to cut the deficit to nine, 19-10.

The Jaguars capitalized on three Carver penalties for 40 yards to move into Taylor’s range. The Spain Park junior made a 31-yard field goal to make the score 19-13 with under two minutes left in the first half.

Carver answered the field goal with a nine-play drive when Johnson scored on a 1-yard run to extend the lead to 13, 26-13, at the half.

Lindsey said that looking back the Jaguars had a great season highlighted by winning the school’s first region championship. He added that his senior leadership was instrumental in the Jaguars’ success.

“It didn’t end like we wanted it to,” said Lindsey. “Our senior leadership was the difference in our season. We had a group of kids that bought in and did what we asked them to do.”

Pelham's Willie Simpson dribbles downcourt in the Panthers' 69-66 loss to Mountain Brook in the championship game of the North... read more